MAP06: The Mines of Death (The Darkening)

MAP06: The Mines of Death is the sixth map of The Darkening. It was designed by Nick Baker (NiGHTMARE) and uses a music track by David Shaw (Tolwyn) from MAP16: The Canyons (The Talosian Incident). 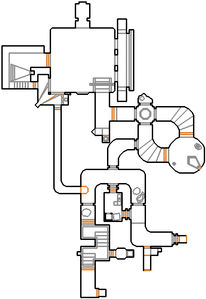 Map of The Mines of Death
Letters in italics refer to marked spots on the map. Sector, thing, and linedef numbers in boldface are secrets which count toward the end-of-level tally.

There is an L-shaped hallway leading to the exit door. In the hallway, past the bend of the L, a section of the south wall can be opened. Inside is an enemy and a computer area map.

* The vertex count without the effect of node building is 766.