MAP06: The Other Side is the sixth map of Stardate 20X7. It was designed by Zachary Stephens (Ribbiks) and uses the music track "Ivor Tower," originally composed by Jeremy Soule for Secret of Evermore. The par time defined in the DEHACKED lump is 1:09. 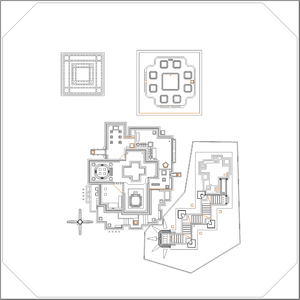 Map of The Other Side
Letters in italics refer to marked spots on the map. Sector numbers in boldface are secrets which count toward the end-of-level tally.

Four invulnerabilities are in a pit at the start and are unreachable. The maximum amount of items possible on this map is 84%.

* The vertex count without the effect of node building is 5120.