MAP06: The Powerstation is the sixth map of Memento Mori. It was designed by Eric Sargent with miscellaneous edits by Mark Klem. Klem also wrote the level's music track, "Terror." 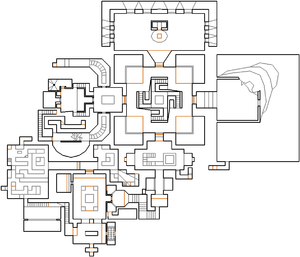 Map of The Powerstation
Letters in italics refer to marked spots on the map. Sector, thing, and linedef numbers in boldface are secrets which count toward the end-of-level tally.

Go down the southern stairway and head through the southern door. From there, go all the way south, head up the staircase, and flip the western switch. Head outside, and go through the northern door. Go to the southwest of the storage room, and head up the crate "stairs." Approach the stack of smaller crates and it will lower. Walk over that stack, and the stack behind it will also lower. Walk onto that stack, wait for it to rise again, and hit the northern switch. Run back to the wall bordered by blue lights as quickly as you can; it will have opened to reveal another storage room. Navigate your way to the northwest of the room, climb up the "stairway," and jump through the hole in the south. Head to the southeast of the room, head west, and go down the staircase. Head up the next flight of stairs, take the lift, and press the switch to the east. After this, flip the northern switch to open another room to the south. Take the teleporter there, go back to the western storage room, and take the now lowered teleporter in the northwest. Walk across the now raised walkway to the blue key.

Reenter the starting area and open the western, blue door. Take either of the stairways down, and enter the southwest teleporter. Go through the hallway until you reach a cavernous area. Go around the pile of earth, and head upstairs to get the red key. Backtrack to the beginning of the level, and enter the northern, red door. Upon entering this area, everything will turn dark except for a nukage pit and a platform with a chainsaw. Step onto this platform, and several walls will open around the area. Head to the very north of the corridor, and flip the skull switch to the south. Go back to where the slimefall was to find the yellow key. Make your way back to the beginning of the level, and open the eastern, yellow door. Run outside, and go into the opening in the southwest corner. Press the skull switch, and enter the teleporter. Head into the northern room, and rush through the opening at the east; it will open all the way when you approach it. Press the switch.

On the intermission screen, the level's design is erroneously credited only to Mark Klem. In a Usenet post made in rec.games.computer.doom.playing on September 15, 1996, Klem confirmed this to be an oversight.[1]

The gap between the wooden stairway and the blue keycard platform can be straferan across, allowing a large portion of the level to be skipped.

The data was last verified in its entirety on October 8, 2022.