MAP06: The Round Crossroads (Hell Revealed)

Beware of the many rooms you step into

MAP06: The Round Crossroads, designed by Yonatan Donner, is the sixth map of Hell Revealed. It uses "Rise," the theme song of Rise of the Triad.

This level revolves around a central outdoor area, with several areas that are connected to it. Still no heavy resistance. 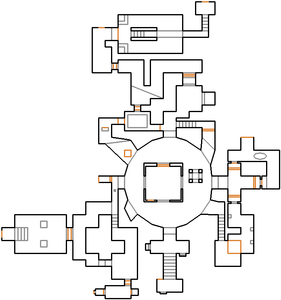 Map of The Round Crossroads
Letters in italics refer to marked spots on the map. Sector, thing, and linedef numbers in boldface are secrets which count toward the end-of-level tally.

Flip the switch at the start to raise some stairs, leading to the main courtyard. Kill all the enemies here and enter the central building to find a switch to open up the crossroads. Take the north path and find an alley leading left that has a lift and a door. Be careful though as there is a crushing ceiling that activates as you approach. Take the lift up and flip the switch to lower it, and then you can get the red keycard. Drop down to the crossroads and take the west road, which is blocked by a red bar. The nearby door here can be opened with the red key, and it has a switch that lowers the bar. After lowering the bar, head through, and take a right at the fork. At the end of this path is the blue keycard, and there is also a door here that you should enter. Kill the arch-vile and imps in this room and hit the switch at the far end, then return to the room with the crusher. This time take the door at the north end of the room and then go left at the fork to find the blue door. Open it and kill the barons of Hell inside, then flip the switch to activate a lift up. The next room has a large amount of enemies, so kill them and then head up the stairs to a computer area map. There should be a bridge with health bonuses leading to the exit, which was raised after hitting the switch in the arch-vile's room.

* The vertex count without the effect of node building is 547.