MAP06: Timeless is the sixth map of Hell Ground. It was designed by Alexander S. (Eternal) and uses the music track "Time to Die" from American McGee's Alice. Set among a few buildings in the middle of a featureless plain, the map is devoid of combat, and instead features a set of simple switch puzzles. 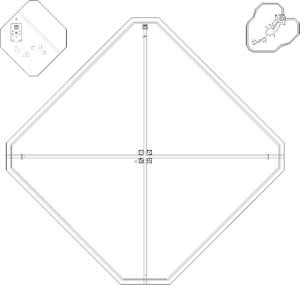 Map of Timeless
Letters in italics refer to marked spots on the map. Sector numbers in boldface are secrets which count toward the end-of-level tally.

After a brief introductory sequence, you will find yourself on the southern end of a giant featureless plain. Start by heading north along the pathway, until you come across a crucified marine and a building. Enter the building and use the clock like a switch to receive a yellow skull key.

Head towards the four buildings in the middle of the plain. Use the yellow skull key to enter the northwest building, and use the skull switch on the back of one of the bookshelves. This will activate a lift in the northeastern building; go there and step from lift to lift until you obtain the blue skull key.

Head across the plain to the west, where a blue portal to 'Eden' awaits. Use the blue skull key to enter it. In 'Eden', straferun from one floating block to another until you reach the final platform (if you fall, wait a bit and you'll be carried to a teleport that will bring you back up.) The blue keycard waits there for you, surrounded by four colored tiles; pay attention to them. To leave, jump off the northern end of the platform into a teleporter.

The blue keycard in hand, head back to the four buildings and enter the south-eastern one. Inside are several satyr switches paired up with colored tiles. Press the four switches that correspond to tiles in Eden (orange, green, red, gray/white pebbles). Then press the gargoyle switch to lower the bars (if it doesn't work, use the "reset" switch in the south-western building and retry). Use the revealed lion switch to create a staircase in the south-western building, which will lead you to the red skull key.

Use the red skull key to access the 'Hell' portal on the eastern edge of the plain. Head down the path, step on the glowing pentagram and wait for some time until the level ends automatically.

Since the only monsters on the map are two lost souls in Hell (which are trapped and unable to attack, and don't count towards the kill percentage), several of the categories are redundant. In particular, the UV -fast and -respawn categories are essentially equivalent to UV max, and UV Tyson and pacifist are equivalent to UV speed.

* The vertex count without the effect of node building is 4095.