MAP06: Trapped is the sixth level of Memento Mori II. It was designed by Adam Williamson and uses the music track "Peaceful Altercation" by David "Tolwyn" Shaw. It contains a separate area for multiplayer competition.

Alright, listen up marine. We sent some scouts into this next zone, but they didn't get very far. All but one had their cameras knocked out immediately, and that one managed to get one picture back before it lost the camera. The last transmission we got was...

The transmission cuts out for a few minutes.

That is all we heard. It seems to indicate some large traps in operation in this area, so be on your guard! Good luck. 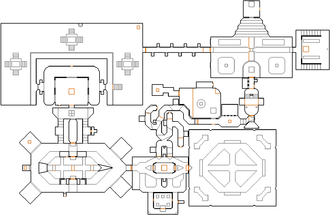 Map of Trapped
Letters in italics refer to marked spots on the map. Sector, thing, and linedef numbers in boldface are secrets which count toward the end-of-level tally.

As the level name suggests, this level is full of difficult traps.

You begin in the center of a metal walkway in a large room. Depending on your skill level, you either only have four imps to deal with, or you are getting skewered on all sides by a pair of shotgun guys, a pair of chaingunners, and those four imps. Don't fall into the blood here, as there is no way out. Kill all the enemies in this starting room, and collect the health and ammo from the corners. Once ready, head out through the door in the west.

In this next outdoor area, the threats are fairly considerable - two shotgun guys, four chaingunners, two imps and two demons. You may also notice two blue-locked doors, which we will come back to later. Keep a good sense of your angles, and collect the medikit and armor in alcoves south and north of the central structure respectively if needed.

Once you have thinned out the enemies, head south to find a chainsaw and an open room to the north. You will hear a baron of Hell wake up. Do not enter the room first - instead, lure the spectre and imp on the floor out and kill them first. As you walk into this room, the door closes, and the pillar the baron is on lowers to the floor. If you have the guts, you can deal with it first. If not, flip the switches on the eastern and western walls (to re-open the door and open the next area) first.

Head back out into the outdoor area, then proceed north. Two new hallways will have appeared. Go through them into a darkened tunnel system. This tunnel system is full of traps that open behind you, and some shotgun guys patrol the halls. Your task in here is to flip three switches that will unblock the path to the next area:

Once you are done flipping these three switches, from the "doorway" where the two hallways meet, take a left at the first fork, then go straight. As the corridor turns northeast, brace for a small trap opening behind you with a shotgun guy. Continue forward down the corridor, clearing out any shotgun guys you see.

Along the way, you will see a thin strip of metal on the walls, and alert up to four imps in a hall ahead. This hall also contains the red key. Once you cross this strip of metal, quickly turn back and check for a Hell knight that is released nearby - you do not want it boxing you in while you deal with the imps and the next trap. When the Hell knight is dead, continue forward, deal with the imps, and pick up the red key. Picking up the red key triggers a nearby trap, releasing up to three spectres - which should not be too much of a problem.

With your red key, open the red door in the west of the outdoor area. You are now in a stone-walled outdoor area with a large central building. Some imps guard the floor, and on Hurt me plenty and above, a chaingunner is waiting for you. Kill them all, then head to the north side of this area and go up the stairs. You should see a doorway with a platform in the north, leading into a courtyard. Run into the courtyard and kill the shotgun guys in the courtyard (on Ultra-Violence and above, there are also chaingunners) while being wary of imp attacks from the windows.

Press use on the central metal structure, and it will lower to the floor. It is a teleporter. Step into it to be teleported to the corridor surrounding the courtyard. Deal with the imps there, then head to the northern side of the hallway and flip the skull switch. This opens two doors in the east and west of the walkway. Go through either door.

You are now on a walkway in a large darkened room. It is populated with a large number of assorted enemies, including up to sixteen zombiemen and two shotgun guys on the walkway. Of note are three platforms in the room with a good number of enemies. The west one has six imps, the north one has six shotgun guys, and the east one has a different enemy based on your skill level - a Hell knight on Hey, not too rough and lower, a revenant on Hurt me plenty, and a mancubus on Ultra-Violence and above. Deal with the enemies on the walkway, head down the stairs in the east to deal with the enemies on the floor, then go through the teleporter in the northeast of the room.

This will teleport you to the room before the courtyard, facing a newly-opened door. Kill up to two imps in the hallway ahead, then open the door at the end of the hallway. This leads to the northern bridge to the central building. Open the door in the central building, and enter the room ahead. Take care of the imp in this room. On higher difficulties, up to three cacodemons may become curious and head for you, so be wary. Flip the switch in the northwest of this room, then head out.

From the bridge, drop down to the west to enter a new area. Clear the floor of shotgun guys and the lone chaingunner in the west, then find the alcove in the south. It has a switch. Flip it, and the southern bridge to the central building will lower (mind the imps on alcoves in the face of the building). Ride the bridge up and open the door ahead. Flip the lion switch, and a platform will lower.

If you read the mission briefing in the infopack or text file, this should give you a serious sense of deja vu. The scout was killed when he went into a large building and used a "lift", and the walls began opening up. You are in a large building, and this is a "lift". Equip your heaviest weapon and prepare for a big trap.

Ride the platform up, and step to the east or west. The northeast, northwest, southeast and southwest walls of the building will open up, as well as four corresponding traps in the perimeter of this outdoor area, exposing you to a large amount of enemies. In total, you are caught between:

Collecting the blue key is slightly different between single-player and co-op, due to an obstacle that only appears on co-op blocking a switch:

Return to the outdoor area just east of the starting room. Head into either blue door. This room contains the yellow key. However, as you pick it up, numerous walls in the area vanish, revealing a substantial horde of enemies - including a Hell knight and a revenant. With the increased space you have, provoke monster infighting and let them finish each other off.

Now, return to the courtyard, jump into the teleporter, and go back to the large darkened room. The yellow door in the east can now be opened. Open it, and you will see a long corridor. Run through it and open the door at the end. When you reach the end, alcoves along the corridor will open, releasing up to eight shotgun guys - you want to be out of that corridor before they box you in.

This next big room contains some serious opposition too - a pair of Hell knights in cages, six imps and up to four chaingunners. Walk onto the wooden walkway running north-south and a part of the northern wall opens, releasing up to three barons of Hell into the fray. Deal with them all, then go into the room where the barons came from. Flip the switch on the east wall.

This opens a door in the east of the big room. Your final opposition is a pain elemental, some imps and up to two chaingunners. Head down the steps, and jump into the hole in the floor to exit the level.

To achieve 100% kills, you have to go to the optional area beyond the red key hall. This next area terminates at a balcony overlooking the penultimate room, and has a number of difficult traps:

The only switch you need to flip in the dark maze is the easternmost one. This will open the two southernmost bars, giving enough room for you to walk through. 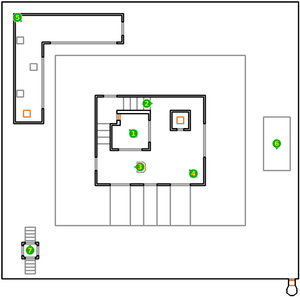