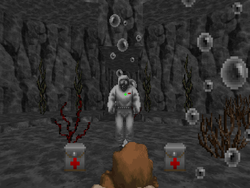 Starting point. Once you leave the bubbles, you'll begin taking damage without the outland suit. 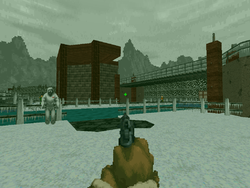 The town itself.
This level occupies the map slot MAP06. For other maps which occupy this slot, see Category:MAP06.

Map06: Wharf Town is the sixth map of Midgard Outlaw, designed by Impie in 2017-2018 and constructed in Doom Builder 2.

Juno tails Drogo and Dawn to the smuggling center of Normandy, but their ship has just set sail. Her only means of catching them is to steal a Jotun freighter. To do that, she'll have to find its captain and kill him for his bridge key.

Wharf Town is divided into four sections: East Harbor, West Harbor, the Grotto, and the River. Juno begins underwater in the grotto, and is barricaded on all sides by sea mines. She can only go up to the surface for now, to the East Harbor. Make your way around the buildings to the docks and board the Jotun ship. The exit switch is on the bridge, but it is blocked. Go below deck and kill the first mate for his red key. Then go up the tower and drop down to the building with the red switch, which lowers the grotto mines.

Go back underwater and hunt the Submariners lurking in the grotto. When they're all dead, you can access the switch that lowers the mines blocking the path to the River, where more Submariners await. When all Submariners are dead, follow the lights to the ladder and climb up to the West Harbor. Clean up the streets and beware the Tank hiding between the buildings. At the north end of the West Harbor is the Town Hall: go inside and climb up to the roof, but watch out for helicopters. Roof-hop to the next large building and enter the small rooftop door: it leads to a barracks and the yellow key. Use that key to enter the harbormaster's office to get the blue key. You can now access the exit switch on the ship's bridge. 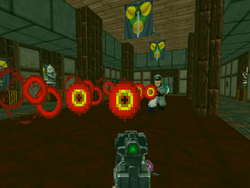 You, Sir, are no gentleman.

The ship captain is a nasty Reeve armed with a pair of coilguns. When you enter the harbormaster's office, you become locked in and must face a miniboss rush: first Drillmatrons, then Norman Thanes, then the Reeve himself.

The Reeve moves quickly and can kill you with only a few rapid shots even fully armored. Two direct hits with the frag cannon will drop him right away, if you can hit him. Make good use of the pillars as cover.