MAP06: nataS ot etubirT is the sixth map of Requiem. It was designed by Thomas Möller, and uses the music track "Path of Destruction" by Mark Klem. Its title is backwards for Tribute to Satan.

This is the place where water usually got cleaned to make it re-usable for drinking; the monsters converted the architecture to a radioactive-slime producing facility. The use for the slime is still unknown, but you can be sure they don't plan good things with it. You must get in and eradicate all alien resistance, and try to re-establish a working facility. Good luck. 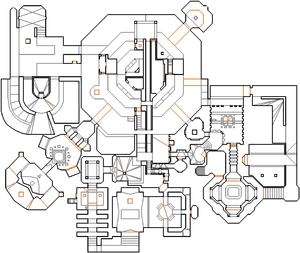 Map of nataS ot etubirT
Letters in italics refer to marked spots on the map. Sector numbers in boldface are secrets which count toward the end-of-level tally.

Behind the starting point, pick up the shotgun and descend down the white floor. Do not fall in the sludge with the spectres. Take the catwalk to the west to a new area and you will be presented with a fork. Go right, up this path until you find a switch on a block. Use it and then take the other path in the fork to find an open door. Go through here to find another fork, in which you should go right where the cacodemon is and ascend the staircase to a long hallway. You will find a barrel and another switch. Be sure to press this switch, then return to the fork you were in to find the other path open. At the end of this path is also a switch, so hit it, and then return to the white-floored hub.

You will see an open door to a small room on your right when you return, go through here and make sure to hit the switch when you do. On the other side, there is not much to do, so just cross the bridge to the other side, killing lost souls as you enter the next side area. In this area, head towards the fountain and some chaingunners will appear. There is a switch on the wall which opens up two closets, both contain chaingunners. Enter the closet on your left to make another switch appear, as well as bars around the fountain. The switch lowers the fountain, but you need to get rid of the bars. The switch also opens up two more closets in the hallways leading to this room. Take out the chaingunners inside and enter the right closet to make the bars go away. Now you can drop down into the fountain. Down here, you will see the yellow keycard and a switch. Flipping the switch causes the keycard to rise, but you will get it anyway. Look out for the demons who will ambush you, and then go through the water killing imps and taking the teleporter back to the white-floored hub.

Back here, there is a wall that says "KEEP OUT - RESTRICTED AREA" with yellow indicators around it. Open it, and then use the lift directly to the left of it to go up a bit. Climb the steps and enter the small blue-floored room to find a switch. Press it to raise a staircase back in the restricted area room. Go here and jump across to the other side. Here, go across to find a blue-marked door. Approach the fence and this will cause a wall to the southwest to open. Hit the switch and ride the lift up, looking out for the baron of Hell in the next room. Go towards the berserk pack in the next room to open the ceiling so you can drop down into the next area. In this small corridor, there is a switch on the left hand side. Press it, and you may have to wait thirty seconds before pressing the next switch, which is behind a barrier. After you wait and press it, press yet another nearby switch to lower the floors so you can continue. There are demons and spectres in the next hallway, so kill them and proceed to the nukage tunnel to find the room with the blue key. Look out for the Hell knights and barons of Hell when you attempt to pick it up, and when you do pick up the keycard, a wall to the east opens up revealing cacodemons and a megaarmor. Picking up the megaarmor triggers the floors to instantly rise, so you can access the small corridors. Go north from there, and you will find that you are looped back to the blue-floored rooms near the blue door. Now head towards the blue door, but first, make sure to hit the down arrow switch next to it. Also, slightly to the right of that switch is a hidden wall with a radiation suit inside, which can come in handy since you will be wading through nukage behind the blue door as indicated by the sign. Through the blue door is a switch at the end. Flip it to open a wall to your left; go through here killing shotgun guys until you find a bridge leading back to the white-floored hub, this time on the other side.

Take the steps up here and enter the blue-floored room to find a switch at the end of a corridor, which raises another bridge going eastward to the next area. Over here, drop down towards the pentagram filled with supplies, and you will be trapped in while imps teleport. You need to shoot an upside-down cross to leave, so do that and when you do, go southward. Look out for the lost souls as you get the red key, and look out for the demons that appear when you pick it up. In the demons' area, find the wooden floor to the east that acts as a staircase, and it will rise up when you step on it. Go through this passage, until you find a switch. Pressing it reveals two rooms of demons, as well as opening the northern hallway containing a few Hell knights. Kill all of them and leave this area returning to the hub. Take the steps up again, then go through the "KEEP OUT - RESTRICTED AREA" sign with red markings to find a Hell knight and a switch. Pressing this opens the wall in front of you, with some imps and another switch, raising one last bridge to the exit area. Kill the imps, but watch out when you press the next switch as you will drop into a room with shotgun guys. The switch in their pen is the exit switch. 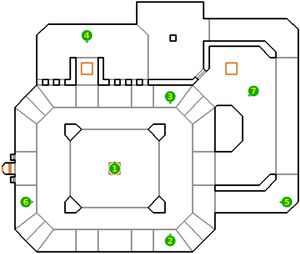 * The vertex count without the effect of node building is 2119.