MAP06 is the sixth level of Brotherhood of Ruin. It was designed by Kristian Aro and uses an untitled midi composition by Paul Corfiatis. 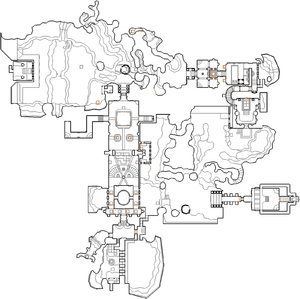 Into the temple, go to the path on your right (south on the map) and hit the switch at the end which opens up the north door back in the temple. Going through this door, be wary of both crushers and monsters alike and when you reach the cage containing demons, take both paths to your left and right. The switches in both paths give you access to the northern outdoor area. Go right at the fork and go into the water following it to a teleporter. After taking it, find the next teleport and take it too. You will end up in an upper part of the valley, go through it into a small cave and take a left at the fork to a switch. This open the bars on the eastern side of this huge area. Go through the temple through the east, and do not forget the BFG9000 in the far east courtyard. Enter the tomb and press the switch here to open up another large open area. Head on over to the west to a building with a cyberdemon and other monsters just outside of it. Enter this building via lift and leave going southeast. The (unmarked) yellow door holds the map exit; you need to take a passage around it to a niche with a switch to open it.

* The vertex count without the effect of node building is 4644.