MAP07: Arachnophobia is the seventh map of 1 Monster. It was designed by "sausage" with edits by Ryathaen, and uses the music track "Shawn's got the Shotgun" from Doom II.

Like all maps in the megawad, the map features only one type of monster, in this case the arachnotron. It is a short level, set in a techbase-style facility. 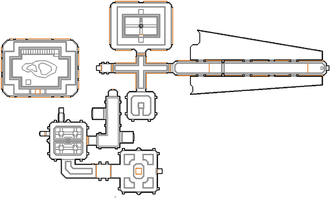 Map of Arachnophobia
Letters in italics refer to marked spots on the map. Sector numbers in boldface are secrets which count toward the end-of-level tally.

"Arachnophobia" is a straightforward and linear map. Go up the lift to the south, then proceed through the teleporter once the bars lower. Get the red key from the northern room, the blue key from the eastern room (behind a wall that will lower as you approach), then use the teleporter in the western room. Ascend the stairway, getting the yellow key on the way, and enter the upstairs teleporter. Behind the yellow door you will find a switch that will lower the bars blocking the exit in the starting room.

In 1monster.wad there are two D_SHAWN lumps with music for MAP07. The first is the theme from "Lunar Military Base" level from Descent, while the second contains "Shawn's got the Shotgun"; it is the second lump which is used by the game for music on this level.