MAP07: Baron's Banquet (No Rest for the Living)

MAP07: Baron's Banquet is the seventh map of No Rest for the Living. It was designed by Arya Iwakura and uses the music track "Into Sandy's City". The par time is 2:45. In the version released as an official add-on, it utilises the red hellish sky of Doom II ("SKY3") instead of the default one featuring brown clouds ("SKY1"), thanks to DMAPINFO. 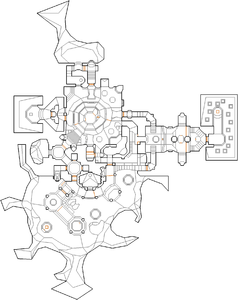 Map of Baron's Banquet
Letters in italics refer to marked spots on the map. Sector, thing, and linedef numbers in boldface are secrets which count toward the end-of-level tally.

* The vertex count without the effect of node building is 1962.