MAP07: Bedlam is the seventh map of Threshold of Pain. It was designed by John Gourley (scalliano) and uses the music track "Hopeless Despair," composed by Aubrey Hodges for the Sony PlayStation port of Doom. The par time defined in MAPINFO is 35:00. 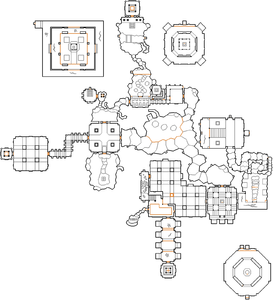 Map of Bedlam
Letters in italics refer to marked spots on the map. Sector, thing, and linedef numbers in boldface are secrets which count toward the end-of-level tally.

Take the shotgun if you need it and climb the steps ahead, then go through the door at the top and collect the backpack. This will drop you into a square chamber with many imps - use the chaingun in the middle of the chamber to slay them all, then go through the east door and head down the steps. You will see a lava pool on your left with three red platforms - two of these platforms must be raised to allow you to climb to the red skull key. Turn right at the junction and continue down the steps until you reach a cavern with a rock floor.

Kill the enemies here and take the chaingun, then go through the south door to a room with four cages containing revenants as well as a pillar with a super shotgun on it. Pressing the switch on the south face of the pillar will allow you to get the weapon, but it will also cause Hell knights to teleport into the cages and lower a wall behind you to release imps and demons. Once the knights have been killed, the east door will open so you can move on to a fenced area with various zombies. Kill them all and take the rocket launcher near the east wall.

Look north to see a door and go through it to a set of steps with platforms on either side; mancubi will appear on these platforms when you start down the steps. Kill or avoid them and head down to the bottom of the steps (watching out for a crushing ceiling near the end) before jumping to a red tunnel. Follow the tunnel to a large marble room with a wide staircase and be ready to kill a number of arachnotrons, imps and nightmare imps, along with two Lords of Heresy in cages either side of the staircase. Once everything is dead head to the top of the stairs, press the skull switch and step into the teleporters on either side.

You will be returned to the lava pit by the red key - one of the platforms has risen, but you need to raise another one. Head south and return to the room with four cages which now contain barons of Hell, and kill all of them along with the demons that have been released from alcoves in the south wall. Once the last baron dies, head through the west door that opens to an outdoor area with square marble columns. Kill the enemies here (mostly cacodemons and nightmare imps) then head north-west to another door and go through it.

Kill one or more zombies waiting behind the door, then turn left to kill a revenant on I am a Wimp (IAAW) or Not Too Rough skill levels or one or two nightmare cacodemons on Hurt Me Plenty (HMP) or higher. Head south across the lava and climb the stairs to find a blood pool with one to three plasma zombies, then look east to see a skull switch guarded by a cacodemon on IAAW or NTR, or a pain elemental on HMP or higher. Press the switch then head through the door to the south to reach an outdoor area.

There are ledges on either side of the path with imps, as well as nightmare imps on HMP or higher. As you pass under each of the metal girders the walls will lower to reveal different enemies depending on the skill level. Be sure to take the chaingun and backpack before you start.

Killing the arch-vile or knight waiting in the south-west alcove will open the door you just used - go through it and step on the teleporter to reach an octagonal area populated by spectres, imps and knights. Go to the center of this area to find a small red pillar and press the switch on its south side, then head south into the teleporter which opens behind you. You will return to the area with the marble columns - look round the column in front of you to see that a cyberdemon has been revealed. Kill it to lower the bars blocking the exits, then leave through the east door.

The four cages in the next room now contain Lords of Heresy, and another alcove has opened in the south wall containing nightmare cacodemons. Kill them using the Doomsphere in the cacodemons' alcove, then leave through the north door and return to the large lava pit. You can now jump up the three platforms to reach the red skull key - watch out for cacodemons appearing at the edges of the pit when you take it.

Jump back down the platforms then head north to find a door with red skull bars. Open the door but do not go through immediately, as there are a number of zombies and nightmare imps in the next room and the doorway will give you some cover. Once the monsters are dead, take the super shotgun then ride the lift up to the ledge that the nightmare imps were guarding. Turn right and follow the ledge to a switch, press it to lower the bars in the south-west corner and head through the bars before they close again.

Kill the imps and nightmare imps in the chamber ahead then go through the north door and follow the curving steps down, watching out for the imps and knights below plus two to four cacodemons that appear behind you when you reach the bottom of the steps. Head north through a tunnel guarded by plasma zombies to reach an area with a short bridge, guarded by imps on one side and arachnotrons and cacodemons on the other. Kill everything then head across the bridge and climb the steps; before going through the door at the top, kill the nightmare imps hiding behind the columns on either side. Go through the door and step into the teleporter to reach an octagonal room holding the blue skull key.

The outer area of the room is guarded by nightmare imps and nightmare spectres, while the fenced area containing the blue key is guarded by one to four barons. Kill all the barons to open the bars blocking your way to the key, then press the switch on the pillar holding the key to lower it. Taking the key will open four alcoves in the corners of the room containing mancubi; on HMP or higher, arachnotrons will also spawn in the outer area. Kill all four mancubi to open the bars blocking the teleporter in the north wall, then step into it to leave the room.

You will be returned to the teleporter past the bridge you crossed earlier. Leave the room to find that one or three arachnotrons have appeared on the south side of the bridge; kill them then cross the bridge and head through the passage to return to the curved stairs you used earlier, where some nightmare cacodemons have appeared. The door at the top of the stairs cannot be opened from this side, so turn right and step into the teleporter that has opened in the west wall to get back to the upper floor.

Go through the west door and kill the zombies waiting behind it, then follow the passage over a lava stream to a cavern guarded by imps and nightmare imps. Go through the south door to return to the starting room, then head through the west door that has blue skull bars. Follow the stairs down past six plasma zombies and open the door at the bottom to reach an outdoor area guarded by one to three bruiser demons. These monsters can launch fireballs and a spread of smaller projectiles which are easily avoided, but they can also generate lines of exploding fireballs that hug the floor and can inflict heavy damage - keep moving and use the columns to give you cover.

Once all the bruiser demons are dead, the door in the west wall will open. Go through it and step on the teleporter to finish the level.

* The vertex count without the effect of node building is 3922.

This level contains the following numbers of things per skill level, not including monsters spawned via action specials or scripts: