Bloodsea Keep is a map that is part of the Master Levels for Doom II. It was designed by Sverre Andre Kvernmo (Cranium), and is contained in the file BLOODSEA.WAD. 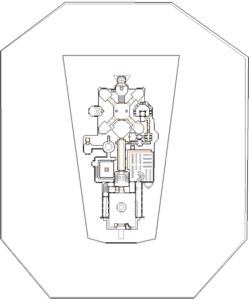 Map of Bloodsea Keep
Letters in italics refer to marked spots on the map. Sector numbers in boldface are secrets which count toward the end-of-level tally.

There are three keys in the level. You can get red and yellow keys at any time but to get the blue key you have to possess the red one.

In the long corridor before the blue key door, open the eastern wall with red flag (it requires the red key) to enter a dungeon-like area. Cross the blood pool and enter the door. The cells containing monsters and various items can be opened manually. Open the door to enter the room containing a soulsphere. To get out of this place press use on the fireplace. Descend by stairs. A slow crusher will activate. If playing on I'm too young to die or Hey not too rough there is a berserk pack. In this dungeon cells can be opened by pressing use. Also, while opening one cell, another cell may be opened.

While playing on either I'm too young to die or Hey not too rough you cannot visit the room of secret#4 whose doors are tagged as 666 because the mancubus that opens this secret after his death is absent on these skill levels.

One teleport landing (Thing 375) is not flagged to appear on those same two skills. The same goes for a deathmatch start (Thing 294), but because of special handling in the engine, it functions normally on all skill levels.

The players can leap out of one of the windows in the western tower (where room with a fireplace is located) to the external blood. Because it does not have a damaging special it is not possible to get out. Eventually, the players can trigger a visplane overflow there.

* The vertex count without the effect of node building is 1538.