MAP07: Castle is the Order's headquarters in Strife. It uses the music track "Strike".

This level introduces the crusader as a regular enemy. After the Programmer is killed, this level is replaced with MAP10: New Front Base and can no longer be accessed.

When the player has accomplished Macil's first few missions (freed the prisoners, destroyed the power crystal and opened the castle gate in the sewers), he participates in the assault to the castle along with many Front's rebel troops. The castle is defended by stalkers, sentinels, acolytes and crusaders. There are some ceiling turrets on the three highest skill levels as well. 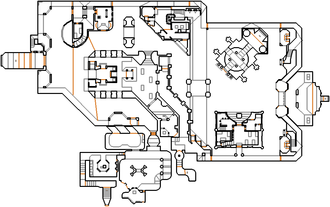 Map of Castle
Letters in italics refer to marked spots on the map. Sector, thing, and linedef numbers in boldface are secrets.

You first enter this level from the sewers, during a task to reach the castle's waste reclamation tank. Turn left and climb the stairs, then ride the lift upwards and climb the next set of steps to the top. Head forward to the silver door (watching out for an acolyte on the right) and go through to an outdoor area with a water pool. Follow the stone walkway past some bars, dispatching one or two stalkers on the way, and head down the steps to a wooden door. Go through and throw the switch next to the peasant (who will remind you about the reclamation tank if spoken to).

Head back up the steps to the bars you passed earlier, which have now lowered, to find a sewage pool - this is the tank you need to access. Turn the valve on the pipe east of this pool to lower the sewage, then jump into the sewage immediately and activate an environmental suit (if you wait too long, you will have to make a long drop into the pit and will receive falling damage). Go into either tunnel to return to the sewers.

For the Front's raid on the castle, you enter from the castle's western gate. Climb the steps and BlackBird will inform you that the Programmer is in one of three possible locations: a computer room, a keep or a long hallway. Open the large gate ahead and go through to find Front soldiers battling the Order's forces; fight or avoid the enemies as you see fit, but as the castle is heavily guarded you may want the rebels to draw enemy fire away from you.

Head north-east around the large building in front of you, watching out for the floors that lower to your right to release crusaders. After going through a large archway flanked by statues, go south-east to find a bridge across the river. Cross it and look left to see a stone building with gray pillars - head into the doorway and take the stairs down to the audience chamber.

After returning from the audience chamber with the silver key, leave the pillared building and look east to see a wall between two guard towers. North and south of this wall are doors with Sigil markings that require the silver key to open. Go through either door and climb the staircase behind them. At the top, follow the passage to get into the guard towers you saw earlier and press the buttons inside them to lower the wall blocking access to the Programmer's keep. Drop out of the tower and head east to the dragon door between the two green pillars to enter the keep.

There is a guard training facility within the castle grounds; it is not required to progress the game, but completing it will reward you with a stamina implant. Before crossing the bridge that spans the river, turn round and look north-west to see a doorway. Go through and BlackBird will comment that this is the "long hallway" she mentioned earlier. Follow the hallway to a set of silver steps, then climb these to a round lift, which will take you down to the passage leading to the training facility.

Once you get the silver key in the audience chamber, you can access the northwestern room of the hospital. The place contains two med patches, four medical kits and a surgery kit.

A stone walkway runs around the outer wall of the castle grounds. It is blocked by several doors which are locked and can never be opened in single-player because they require the chapel key, which is obtained after this level becomes inaccessible.

The teleport map spots 1 through 3 and 5 (Things 13 through 16) have no skill flags set either, but because of special handling in the engine, they function normally in the level.

* The vertex count without the effect of node building is 2539.