MAP07: Caughtyard is the seventh map of The Plutonia Experiment. It was designed by Dario Casali and uses the music track "I Sawed The Demons" from Doom. Interestingly, on Hurt me plenty or higher, this is the first Plutonia map to feature zombieman enemies. 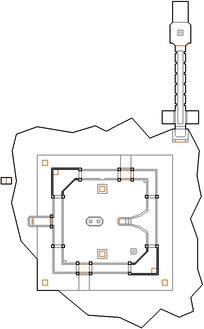 Map of Caughtyard
Letters in italics refer to marked spots on the map. Sector numbers in boldface are secrets which count toward the end-of-level tally.

The beginning task of this level is similar to the beginning MAP07 from Doom II; all the mancubi at ground level need to be killed before the rest of the level opens up. After killing them, lifts will be revealed. Go to either lift and lower it, travel along the way until you find a gap that leads to the megasphere and the yellow key. Run fast toward it (an arch-vile will appear which keeps teleporting between two cages), go back again to any of the lifts and find the yellow door, open it and click the switch (instant Hell knight will teleport).

Go back to the gap, again lower the lifts but do not go up, bridges are connected with the outer area now. Go and find a brown door, open it and clear your way down to the exit.

It is possible to bypass the yellow key by letting the arch-vile blast you over the moat, although you still need to grab the key to release the arch-vile.