MAP07: Computer Station is the seventh level of most console versions of Doom, based on the original E1M7: Computer Station with modifications made to adapt to the consoles' limitations. The author of the conversion is American McGee, and the original author of the map is John Romero. The map first appeared on the Atari Jaguar, and was later ported to the 3DO, Sega 32X, Game Boy Advance, Sony PlayStation, and Sega Saturn. 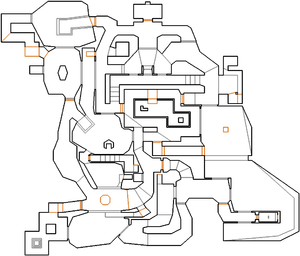 From the start, go through the door in front of you and turn left. Turn right at the end of the corridor and walk forward until you reach a small room with gray and yellow panels. Approach the lift in the south-east corner and it will lower automatically; when it rises, follow the walkway round into a dark room containing the yellow keycard.

Drop down to the ground and head north-east to a yellow door. Go through it, turn left and head around the raised platform in the next room. Turn left at the end of the corridor and head up the staircase. The pillar in front of you will lower to reveal enemies - go around it and follow the right-hand path until you reach a door. Go through it to a room with a central pillar, and use the lift in the north-west corner. Take this up to a short corridor and you will find the red keycard at the end.

Backtrack to the very start of the level. From the starting room, go through the door and turn right and you will see the red door in front of you. Go through it and take the blue keycard sitting on the ground.

Go back through the red door and turn right, following the corridor until you reach another yellow door. Go through, turn right and go straight forward until you see the blue door on your left. Go through it, climb up the staircase and head straight forward. Follow the path until you reach a small alcove containing a switch for you to throw. Backtrack to the previous room and go through the door in the south-east corner which has now opened. Follow the narrow corridor through the exit door and throw the switch behind it to finish the level.

On the path to the red keycard, you will enter a room with a pillar that lowers when approached; when you step on the pillar it will start to rise again. From here you can run over the north or south walls into the nukage pools on either side. This is required to get secrets #1 and #2 (see below) but also allows you to find other useful items.

From the area with the moving pillar, you can go west through a door and up a lift into a dark room containing a box of bullets and a box of shells. There is also a chainsaw hidden in the south-west pillar; if you threw the switch at the top of the hidden staircase mentioned above, the floor around the chainsaw will lower so you can take it.

Four barrels (things 96, 97, 98, and 163) have no flags set for any of the three difficulty classes, so they do not actually appear in the level. This issue is inherited from the original version of the level.

As well as geometry simplification in various rooms, a number of changes were made to this level compared with the PC version.

* The vertex count without the effect of node building is 691.