MAP07: Counterpoint is the seventh map of Doom 2 the Way id Did. It was designed by Richard Frei (Tarnsman) in the style of Sandy Petersen. The par time is 2:00.

As with Dead Simple the level features mancubi and arachnotrons that are necessary to be killed in order to beat the level. The spider mastermind is also presents in this level in all skill levels, though it is optional to kill it. 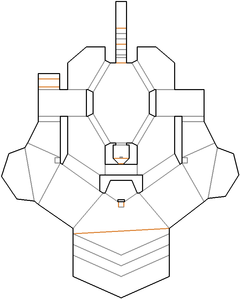 Map of Counterpoint
Letters in italics refer to marked spots on the map. Sector, thing, and linedef numbers in boldface are secrets which count toward the end-of-level tally.

Go forth and open the door before you. As you try to enter area with spider mastermind you will be teleported to another place. In that place you can grab the shotgun and rocket launcher along with super shotgun that lie in the western part. It is enough to just kill mancubi to gain access to area with other arachnotrons to kill, but note that you have to destroy all the arachnotrons anyway. You can also cause monsters to infight before all mancubi are dead. The spider mastermind may interfere you to advance to exit, so it should also be eliminated.

Once all the necessary guys are dead, head into blue floored room with spiderdemon and enter a room south of it. Stairs should now be made to rise on them and then press the switch to end the level.

There is a panel with an evil eye on it and two buttons on either sides of it. Each button lowers the platform on the opposite side regarding to button's location. Two platforms contain megasphere and invulnerability sphere.

A stimpack (Thing 52) is placed outside the map.

* The vertex count without the effect of node building is 173.