MAP07: Cruise Control is the seventh map of Midgard Outlaw. It was designed by Mike MacDee (Impie) and uses the music track "". The map concludes the first "chapter" of the mod: at the end, Juno's inventory is reset again. 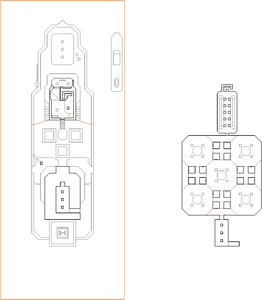 Map of Cruise Control
Letters in italics refer to marked spots on the map. Sector, thing, and linedef numbers in boldface are secrets which count toward the end-of-level tally.

Juno boards Dawn's cruiser and prepares to take her and Drogo down once and for all.

There is a small army on the weather deck where you begin the map. Take up a good defensive position and pick them off with the Gungnir as they come to you (watch out for the Purgers and Lancers on the upper catwalks). When you round the bridge, the cargo lifts raise and reveal a pair of tanks. Destroying them raises the bridge stairs. The bridge is manned by a Drillmatron and Amazon, and a handful of Shieldmaidens and stationary Captains. Grab the Mako coilgun from the sniper's roost and take the stairs down to the engine room.

Here you'll face a trio of Amazons, one of which carries the red key. Kill them all and unlock the lift to the ship's power core, where you'll face Commander Dawn. Her death reveals the switch for the next lift: take it back up to the weather deck just in time to watch Drogo escape on Dawn's helicopter.

Commander Dawn confronts you with a brand new suit of prototype battle armor, courtesy of Drogo. She moves as fast as you do and unloads volleys of coilgun trails and seeker missiles. Between her tough-to-dodge projectiles and her impossible-to-outrun speed, she is easily the toughest enemy in the entire wad.

The quickest and surest way to kill Dawn is with the ballistic knife, so it is essential that you collect all six from the previous maps. Five or six direct hits will put her down. Otherwise prepare for a rough fight and throw everything you have at her.