MAP07: Damned Hallways is the seventh map of 2048 Unleashed. It was designed by sincity2100 and uses the music track "Backfire" by Paul Corfiatis. 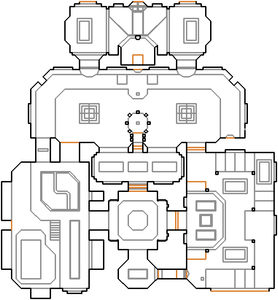 Map of Damned Hallways
Letters in italics refer to marked spots on the map. Sector, thing, and linedef numbers in boldface are secrets which count toward the end-of-level tally.

Take the shotgun and open the door in front of you to confront two shotgun guys - a metal column holding a super shotgun will also lower to reveal a demon (or cacodemon on Hurt Me Plenty (HMP) skill level or higher. Turn right and head through a doorway blocked by two chaingunners on Ultra-Violence (UV) and Nightmare (NM) skill levels. Climb up the stairs in the next room to dispatch some zombies (and a Hell knight on HMP) then press the switch between the computer terminals which will open a door to the north, as well as opening two closets behind you containing a demon, plus other monsters depending on skill level.

Head through the door you just opened and follow the walkway round to a pillar holding the yellow keycard - take the rocket launcher next to the pillar then continue following the walkway to a switch between yellow key strips - flip the switch to lower the key pillar, then kill two knights/barons of Hell which teleport in to defend it. Take the yellow key then drop to the floor below and look south-east to see a door (requiring the yellow key) between two tall lamps. Open the door (which has a cacodemon waiting behind it on HMP or higher) then turn left and climb the stairs to a walkway. Follow the walkway past several zombies until you reach the blue keycard sitting on a small pillar.

Drop to the floor then look north to see a lift which you can ride up to a platform (with an arachnotron on HMP or higher). Go through the door here then return to the start point, where you will find a small door between two floor lamps that requires the blue key to open - go through it and collect the red keycard, which will cause two revenants to appear behind you on HMP or higher, then go back to where you found the yellow key and flip the switch here (between two red key strips) to open doors on either side and release a number of demons and zombies. Go through the doors and throw the switch in the north wall, which will open a closet behind you and reveal two or three revenants (plus an arch-vile on HMP or higher) - enter the closet and step on the red teleporter pad to finish the level.

Pressing the switch in the south-west room will open two closets containing monsters. The closet with the knight/baron also contains a backpack.