MAP07: Dare to Fly Where Eagles Soar is the seventh map of Ancient Aliens. It was designed by Paul DeBruyne (skillsaw) and uses the music track "Featherfall," composed by Stuart Rynn (stewboy). The par time is 5:15. 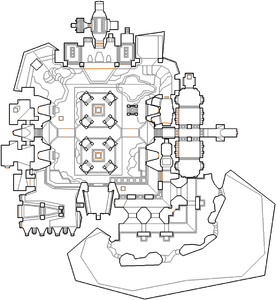 Map of Dare to Fly Where Eagles Soar
Letters in italics refer to marked spots on the map. Sector, thing, and linedef numbers in boldface are secrets which count toward the end-of-level tally.

Run forward at the start and pick up all the weapons on the ledges. Jumping into the pit at the end will release some cacodemons, but has some much needed boxes of rockets, a combat armor, as well as the exit door (which requires all three keys). Taking the teleporter will put you back at the start of the map. There are some goodies in the main area: medikits can be found in the northwest, while a spare combat armor is in a room on the northeast, but this is guarded by some shotgunners and a revenant. From here you have three paths:

Head into the southeastern part of the main area. Here you'll find an elevator guarded by an arachnotron. Head up, then turn right and go down the corridor until you press a button. This will drop walls and expose you to revenants, demons, some shotgunners, and a mancubus. Kill them, then hit the switch in corner wall to expose an archvile on the other side of the elevator you took. After killing the archvile, take the teleporter behind him and you'll end up in a spirit corridor, telefragging a mancubus and acquiring the red key.

Press the switch in the western room to open two doors to your left and right, both rooms containing shotgunners, zombiemen, and revenants. The right room has a teleporter which telefrags a mancubus and gives you a soulsphere, while the left side has a switch that will lower a nearby elevator. Jump on and kill the enemies at the top. Walk around the structure and press the button to trigger an ambush. After dealing with that, press another switch where the revenants were to open a teleporter on the other side of the balcony. Take this to telefrag another mancubus and acquire the blue key.

To the east is a pit with a rocket launcher and some rockets in it. Dropping down will aggro some shotgunners, two arachnotrons on perches, and some barons of Hell. After disposing of them, head into the corridor and press the switch. An alcove will open up where the northern arachnotron was with an archvile. Take the teleporter behind him to telefrag another mancubus and reach the yellow key.

After getting all the keys, head back to the pit and open the door. Kill the enemies inside but attempting to open the wooden exit door will trigger one last ambush of imps and revenants. Kill them, hit the northern switch, and exit the level.