MAP07: Dry Well is the seventh map of NOVA II. It was designed by Ilya Lazarev (joe-ilya) and uses the music track "Mission Fucking," by Sam Swain. 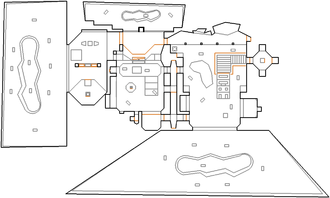 Map of Dry Well
Letters in italics refer to marked spots on the map. Sector, thing, and linedef numbers in boldface are secrets which count toward the end-of-level tally.

Monsters won't attack the player while he's over or under the fake 3D bridge.

It's possible to skip most of the map by performing an arch-vile jump in the second well by jumping onto the yellow pillar (make sure you didn't lower it yet) and skipping having to take both keys and ending up technically behind the red door.

* The vertex count without the effect of node building is 802.

Started off as a tiny sketch drawn at school, then heavily modified and expanded on a computer.