MAP07: Enemy Caught is the seventh map of Plutonia 2. It was designed by Charly Goulois (Kira) and Vincent Catalaá, and uses the music track "Rock the Building" by Jamie Robertson. The par time defined in MAPINFO is 2:00.

The map itself is based on Plutonia's Caughtyard, but with more enemies and areas of exploration. 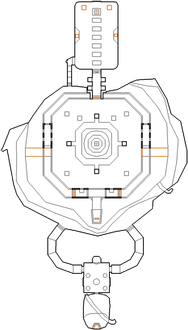 Map of Enemy Caught
Letters in italics refer to marked spots on the map. Sector, thing, and linedef numbers in boldface are secrets which count toward the end-of-level tally.

You will want to get rid of all the mancubi in this arena, as you cannot progress further unless you do so. Also you should kill cacodemons, revenants, chaingunners, and Hell knights as well, since they will hinder your progress later on. When you kill all of the mancubi, the lifts to the sides will become available. From them, you should kill the remaining monsters on the walls, as well as the arachnotrons outside of the arena. Killing all of the arachnotrons raises a bridge to a switch accessible from the southern end of the arena walls. Press this switch to open the two doors on the ground, and then head through either one. In the room that connects both paths, get rid of the demons, barons of Hell, and the chaingunner, then go through the vines to the south to get the blue skull key. Get rid of the ambushing monsters both here and back outside, then return to the arena and enter the blue door to the north. Upon opening the door your will be greeted by revenants, barons of Hell, and Hell knights. Open the exit door, and look out for the arch-vile teleporting on both sides as you descend the steps to the exit.

Two multiplayer-only barons of Hell (Things 18 and 19) north of the arena have no flags set for any of the three difficulty classes, so they do not actually appear in the level.