MAP07: Frustration is the seventh level of Memento Mori II. It was designed by David Kuykendall and uses the music track "Midnight Call" by Mark Klem. It contains a separate area for multiplayer competition. It is infamous for featuring a door that does not usually open all the way, forcing the player to use it repeatedly until it opens enough to allow them through.

Finally you fight and frag your way out of hell, a sewer tunnel looms before you, light shines at the end. Salvation! You have beaten them! Not too hard you think to yourself, a cakewalk compared to last time... Well, time to go home. Humming to yourself you sling your shotgun over your shoulder you make your way to the exit, only to find that it is blocked!
Well dammit, must be a way around...how bout [sic] this ladder...?
Hmmm, maybe your [sic] not done yet... 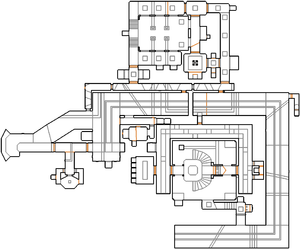 Map of Frustration
Letters in italics refer to marked spots on the map. Sector, thing, and linedef numbers in boldface are secrets which count toward the end-of-level tally.

This level has a large amount of traps (both of the monster closet and teleport varieties) that trigger without warning, so use caution even when re-visiting earlier areas.

From the start, turn to your right and head up the ladder to a door. Open the door and proceed ahead.

In this piped-walled hallway are a number of shotgun guys. Clear them out, then proceed to the door in the west. Open it to reveal a small room with plenty of supplies. However, be careful of the imp and revenant (not on Hey, not too rough and below) in this room. Collect the two shotguns, two chainguns, chainsaw, armor and stimpacks (if needed) and head back out.

Next, proceed to the east side of the hallway, where there are two small doors facing a large door. Open the large door and immediately backpedal to the north. All three doors will open, and you will be wedged between an imp and a chaingunner (on Hey, not too rough and below), or a Hell knight and two chaingunners (Hurt me plenty and above). A number of demons will also begin teleporting into the corridor. Go through the big door and collect the yellow key, but be wary of the imps in cages on either side.

Go back through the door in the north, and drop back down the ladder into the sewers. Go through the small door in the northeast. To the left, you can see a soul sphere behind a jammed door, but be careful of the imp and chaingunner nearby. The next brown door ahead is the infamous "frustrating door" that probably gives the level its name. When you open it, it seems to jam at a random height. However, it isn't exactly random - the height at which the door will jam actually follows the movement of a crusher. Repeatedly open and close the door to see whether the height of the "jam" currently is, and time your opening of the door to get through.

In this next hallway, kill any shotgun guys and imps you see. Go to the end of the corridor and open the door to reach a T-junction. Open the yellow door in the south and go down the hallway. As you approach the door ahead, it will suddenly open, revealing up to three imps and on Hurt me plenty and above, a revenant. Back up and hold them at bay with your shotgun.

This next room has a central pillar with a slimefall. As you approach the computer panel in the south, the door in the east opens, revealing an imp (Hey, not too rough and below) or a revenant (Hurt me plenty and above). Once you've dealt with it, press use on the computer panel. The slimefall within the pillar should shrink to a thin stream. This opens up another area in the north.

You will be back in the hallway just after the "frustrating door". A trap will open in front of you with up to three imps and a revenant. Dispose of them and head back through the "frustrating door." Back in the dark corridor, immediately look right (towards the west) - up to two chaingunners have been teleported here, and lie in ambush.

Go through the small door, and return to the sewers.

Go back up the ladder, open the door ahead, and return to the part of the hallway in the east with three doors. Open the big door ahead (watch for imps from the two small doors), and grab the super shotgun. This room is chock-full of opposition, with your biggest threat being a cacodemon (Hey, not too rough and below) or a pain elemental (Hurt me plenty and above) that appears from the slime. Grab extra shotgun shells from the southeast corner, then use your chaingun to take out the soft targets and your super shotgun to take out the flying one.

Once the room is relatively clear, head to the northwest corner of the room and collect the red key from behind a pillar. Head back out the stairs and backtrack to the sewers.

Head through the door ahead, and you will be in a long corridor. Watch for a shotgun guy in the east, and kill him. Proceed to the eastern end of the corridor to collect your hard-earned soul sphere. Open the nearby small door and go through it.

You are now in a different part of the sewers. This time, you are going to face much stiffer opposition - mancubi. Use your super shotgun to puncture them. Follow the grey metal path to a T-junction. Watch for an imp waiting in ambush, then go through the western door (the eastern door is a fake - it's just a wall with a door texture).

In this set of corridors, run forward until you hear a revenant wake up (two on Ultra-Violence and above), then back up. Use your super shotgun to drop them quickly before they overwhelm you. Walk into the corridor which the revenants came from, and you will see two doors and the blue key through a window. None of the doors work. Exit the corridor and leave via the door you came in.

Walking into the revenants' corridor opened a metal panel northeast of the T-junction in the sewers. Enter the hallway and collect the berserk pack at its end. Feel free to use it on the demon in the trap ahead. Look for a nearby switch and flip it, which opens up the door opposite the switch.

On your way out, look for an imp to the right in a newly-opened trap. Leave this area and return to the sewers.

Next, look for a newly-opened doorway northwest of the T-junction, flanked by blue lights. Head inside and lure the Hell knight (Hurt me plenty and above) out. Collect the computer map it was guarding and flip the nearby switch. Head back out the doorway you came in.

Collecting the blue key has triggered a large number of traps of various types. You will now have to fight your way through previously-visited areas to get to the exit.

Return to the sewers. A trap south of the T-junction will have opened with a demon; another one opened west of it with another demon (Hey, not too rough and below) or a mancubus (Hurt me plenty and above). Kill them, then proceed through the doorway northwest of the T-junction, flanked by blue lights. This time, continue down the corridor, and open the large brown door nearby.

The two cages on either side have somehow "refreshed" with more imps. Kill them and proceed through the door ahead, back into the room with a catwalk around a slime pool. Prepare your heaviest weapon and prepare for mayhem.

Numerous traps, both monster closets and teleport traps have filled this northern part of the map with a large number of enemies! You will have to fight your way back to the "frustrating door" facing a large number of imps, chaingunners and up two revenants and two Hell knights roaming the corridors. This will be a tough battle - you need to try to cause some monster infighting to save your ammo and take the pressure off you. get through the "frustrating door", and head back into the starting sewers.

Climb back up the ladder into the hallway. Watch for imps that have re-populated the hallway. Open the big door in the east again, and deal with a newly-teleported Hell knight. Go through the door ahead into the room where you picked up the red key. You only need to worry about a newly teleported cacodemon (Hurt me plenty and below) or pain elemental (Ultra-Violence and above) from the slime, as well as two chaingunners that have appeared in the trap in the southeast.

Go through the corridor in the south of this room. Kill the revenant ahead. Pick up the rocket launcher on the floor, and switch to another weapon. Press use on the bars blocking the switch ahead, and immediately run backwards to the corridor before you get wedged between a Hell knight and a wall.

Return to the alcove flip the switch, and a nearby gate will open. Deal with the chaingunner or two, and step out into the final stretch of the sewers.

Your last opposition is up to four mancubi that roam this last stretch of the sewers. Use your rockets wisely to deal with them. Head to the northwest corner, where the exit door is.

Open the exit door and climb up the ladder to exit the level. 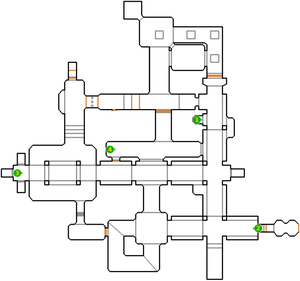 * The vertex count without the effect of node building is 2196.

The "frustrating" door works by exploiting the property of doors to open to four units below the lowest adjacent ceiling.

The neighbouring sectors to the actual door that are within the level geometry (178, 175, 174) have ceilings of 96 units. Thus, since sector 180 is oscillating between heights of 16 and 96 units, it is very likely to be considered the lowest adjacent ceiling for the purposes of the door's operation. Thus, when the player opens the door, the lowest adjacent ceiling is calculated by reference to sector 180. Hence, the door will raise itself to whatever height the ceiling of sector 180 is at that time, minus four units, giving the appearance that the door has jammed at a random height.