MAP07: Gauntlet is the seventh level of Resurgence. It was designed by Josh Sealy (Joshy) and uses the music track "Chikka Boom DOOM" by John Weekley (PRIMEVAL), composed specifically for the level. 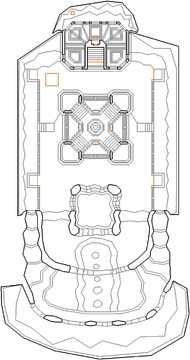 Map of Gauntlet
Letters in italics refer to marked spots on the map. Sector, thing, and linedef numbers in boldface are secrets which count toward the end-of-level tally.

You start the map at the bottom of a deep hole. Pick up the weapons and ammunition, then shoot any one of the four walls, which will raise the floor, entering you into the action. Take the megasphere, then go up onto the walkway around the side behind the start position, using the brown lift. Clear all the monsters on this walkway, most importantly the mancubus, then drop back into the lower area, and go up the metal lift on the side of tower. At the top, quickly take the rocket launchers around the mancubus, but do not kill it yet. Currently it is safer to ignore the mancubi in the small watchtowers at the top of the stairs in the corners. Jump off one of the sides of the tower, and clear the rest of the enemies. On the far side of the map from the start position, there is another walkway like the one you already cleared. Go up onto this walkway and clear this one too, and now use the rocket launcher to kill the mancubi in the watchtowers. Repeat this on the other side of the map. Go back onto the roof of the tower, and kill the mancubus in the center. Now run into one of the watchtowers, and kill the monsters that teleport in from there. Having killed every mancubus in the map, the next part of the level will begin.

Large walls of rock will have lowered in the southern portion of the map, revealing a large area with a cave behind it, containing a large number of revenants, demons, and a spider mastermind leading the pack. Four arachnotrons (or two on ITYTD and HNTR) are also included. Killing all the arachnotrons will cause additional monsters to teleport into the map. The spider mastermind is able to leave its starting position, which should leave the soulsphere next to it unguarded. Also make sure to kill the revenants standing on the platforms leading to the yellow skull key.

You will need to get to the imp-infested ledge running around the side of the cave to get the yellow skull. You can do this by going back up onto one of the walkways, and entering the cave from there. Run along the platforms to get the key. This does not activate any traps.

Go back up onto one of the walkways once more, and now head to the north-end of the map, and open the yellow bar on whichever side of the small building you are on. Go down either of the staircases in this building, and kill the pain elemental, then press the switch behind where it was waiting. As you leave the alcove with the switch, you will be teleported to the southern side of the tower, where an arch-vile will have just appeared. Kill it, then run to the northern end of the map, and run into where the wooden doors have opened, which will exit the level.