The author of the original level was John Anderson (Dr. Sleep). Changes for the PlayStation port were authored by Tim Heydelaar.[1] 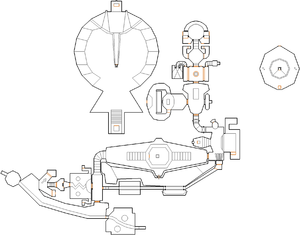 Map of Geryon
Letters in italics refer to marked spots on the map. Sector, thing, and linedef numbers in boldface are secrets which count toward the end-of-level tally.

Follow the blood river in front of you and drop down a hole. Open the door to the north, go north through the next room and climb the staircase to a long outdoor area. Head east (either by climbing up the elevated platform or going around it) and open the door at the end to enter a brick room. Head north and then north-west until you reach a door. In the next room, press use on the demon face texture on your left to reveal another room - go inside it and go through the north opening. You will drop into a damaging blood pool - go south-west and press the switch on the west wall, kill the enemies that ambush you and go south-east, leading to a lift out of the pool. Return to the previous room where a door on the east wall has now opened - take the blue keycard from behind it.

Head north through the blue door and open the wall at the north end of the next room. Keep heading north down the stairs until you reach a circular outdoor area. Press the switch on the west wall to lower the lift next to it, then step on this lift to be taken up to another switch. Press this switch and quickly run back up the staircase, heading west through a door that has opened temporarily. Follow the narrow passage to a teleporter leading to a circular room - from here, go south and step on another teleporter to be taken to the exit area.

In this area, run north up either staircase. At the top, run south and press the switch on the central walkway, which will lower the wall behind you and reveal the exit teleporter. Head north through this teleporter to finish the level.

* The vertex count without the effect of node building is 1186.