MAP07: Hell's Gift is the seventh map of Requiem. It was designed by Jens Nielsen and Matthias Worch, and uses the music track "Jacob's Staircase" by David Shaw (Tolwyn). It is referred to on the intermission screen as Hells Gift [sic].

A rather small level reminding of [sic] "Dead Simple" in the original DooM II. 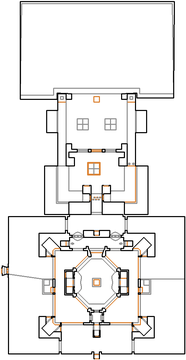 Map of Hell's Gift
Letters in italics refer to marked spots on the map. Sector numbers in boldface are secrets which count toward the end-of-level tally.

Head through the door in front of you to get a rocket launcher. Picking it up also reveals a monster closet and a switch. Flip the switch and head up the lift. Be sure to press the switch to the east at the top, and then take the hall north to receive the red skull key. After that, drop back down into the courtyard and flip the other switch to lower the other walkway. At the top, press the switch to the west and it should open the barriers to the north so you can get the blue skull key. Watch out if you go back as there might be a room open with monsters. Now open the blue and red bars to proceed into the next area. The outer perimeter of the next area has some shotgun guys, as well as cacodemons, barons of Hell, and/or Hell knights depending on your difficulty setting, so kill them and then kill the mancubi inside. Killing them causes the interior walls to lower so you can enter. When you approach the yellow skull key in the middle, the arachnotrons will show up. Kill them to raise a step so you can get the key, but watch out for the monsters that appear. When you are done, head for the door on the west wall to exit.