MAP07: Hollow Icon is the seventh map of Sunder. It was designed by Insane_Gazebo and uses the music track "Demons on the Prey," originally composed by Robert Prince for Doom. 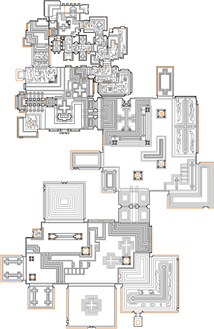 Map of Hollow Icon
Letters in italics refer to marked spots on the map. Sector, thing, and linedef numbers in boldface are secrets which count toward the end-of-level tally.

This is the first map that manages to break 1000 monsters, with almost seven-eighths of the monsters being imps. As usual, pick up the two shotguns, backpack, and green armor, and head out of the starting room. This room will have revenants to the immediate right, mancubi on a ledge behind the metal column in the middle, and imps on a higher ledge. The rocket launcher is to the southeast. When you can, head up to the ledge with imps and head west, where more walls will lower. Revenants will be to your west, while Hell knights will be behind you. The metal column in the middle will also be open with two arch-viles inside. A chaingun is located where the revenants came out of. Be sure to press the two switches on this high ledge, both to open the eastern door here and raise the lift leading to that door.

Past the door, approach the green armor for the walls around you to lower, revealing revenants, Hell knights, and a baron of Hell. A plasma gun is on the south wall, and a switch on the north. The switch opens up the next door, and the room ahead will be empty. Get the soul sphere if needed, then climb the steps to the right up. The large wall will lower revealing revenants, lost souls, and cacodemons. Another wall in the southwest corner will also lower revealing barons of Hell. The switch behind the large wall will open a door leading westward into another empty hallway that ends with another switch. Approaching this switch will lower walls behind you, revealing barons of Hell and revenants. The switch raises the lift in the previous room, allowing you to continue.

In the hall that follows, there is a berserk pack in an alcove. Approaching the next door opens the southeast wall. Back here you will only have to fight six monsters, two cyberdemons and four barons of Hell. Press the switch here to open the doors, then head west into the large room. This is the first big room of the map, and while mostly empty for now, it will become populated with monsters soon enough. Revenants will be behind a blue door here, and you can shoot them now or later. What you need to do first to get past this first big room is to head behind the group of teleporters to the switch that is available. Just approaching it is enough to release several monsters in the vicinity. Demons will appear from a wall to the northeast, while a central block will reveal eight barons of Hell and an arch-vile. Four cyberdemons will come into the big room from the northwest. Imps will continuously spawn from the teleporters, and in the southwest end you will find multiple Hell knights, barons of Hell, and the BFG9000.

Make sure you have pressed the switch, because it will raise the bars well to the north, where the blue key is located. If you attempt to grab the BFG9000, the wall ahead will lower, revealing more Hell knights, barons of Hell, and three arch-viles behind that horde. The door behind them will be opened later. Now head all the way north and get the blue key. You will be trapped in while two walls will lower, with cacodemons to the west and demons and Hell knights to the north. The switch behind that horde will allow you to return to the big room. With the blue key, open the door at the top of the steps near the group of teleporters, get rid of any revenants that may still be around, and press the switch at the end. The door mentioned earlier will have opened once you used the switch, and the switch behind this door will open the way to the second big room.

This second big room is even larger than the first, and as usual, starts out empty. You will fight numerous hordes in this room, but it will all be in one wave, so you will not have to worry about reinforcements arriving. To proceed, grab the megasphere in the southeast to make multiple walls lower. The one in front of the megasphere contains mancubi, a spider mastermind, and two cyberdemons. The eastern wall contains imps, while the wall in the center reveals a high ledge with revenants. The wall all the way to the north has imps, demons, Hell knights, barons of Hell, and cacodemons. The wall on the west side has lost souls, Hell knights, and cacodemons, and finally the southwest corner has imps and mancubi. Provoke monster infighting when you can, and keep any and all supplies close by. When it is quiet, you will need to press three switches to proceed to the final room. The first is in the southeast corner, followed by one in the west wall, and finally the one in the north wall.

The final room is about as big as the one before it, and again you will only have to deal with one wave of enemies, but it will still be a large horde. To proceed, the megasphere is at the northwest corner along with a switch. Make sure to press the switch. The walls will lower. The southwest corner will reveal demons, arachnotrons, imps, Hell knights, and pain elementals. The north and south walls will provide the bulk of the monsters, with the north one containing imps and three cyberdemons, and the south one having imps, barons of Hell, Hell knights, demons, two spider masterminds, and seven cyberdemons. Teleporters are inside both of these walls, allowing travel to and from these two areas if needed. The southeast corner has a high ledge with imps and revenants which will contain the exit, and will be the last place you will go. You will have your work cut out for you here, so monster infighting is highly recommended, but try not to get surrounded, especially given that the pain elementals will likely clutter the field with lost souls. When all is finished, you will have two switches to press to raise the lift at the southeast (three if you had not hit the switch where the megasphere was earlier). Go to the southern compartment for the first, and the northern compartment for the second. Ride the lift up and you will be able to exit to the south.

* The vertex count without the effect of node building is 13142.