MAP07: Identity Check is the seventh map of the Newdoom Community Project. It was designed by Fatal. 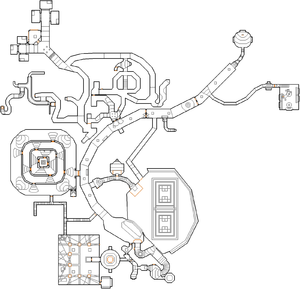 Map of Identity Check
Letters in italics refer to marked spots on the map. Sector, thing, and linedef numbers in boldface are secrets which count toward the end-of-level tally.

This is a very interesting level where crossing through frames with red lights may indicate something bad might happen, and crossing frames with blue lights will generally mean you are safe.

For the quick way of reaching the blue key, head up from the start and go down the long hallway until you find the first door on your left. You will end up in an area with concentric hallways. Here, do not go through any frames with red lights on them. If you do, the doors will close and you will not access the key (the first time you do this, you will also release a number of monsters as well). You can only open doors going outwards at this point. If and when you mess up, press the switch in the southeast corner of the outermost hallway to reset the puzzle. Go through the blue-lit paths progressively towards the center in order to get the blue keycard. For the quick solution, take the south, the east, and then the south frame in order to successfully reach it. When you get the key, you do not have to worry about taking the wrong frame at that point.

Now go back to the hallway and keep going until the next passage on your left. If you go through the red frame, a closet behind you with a cacodemon opens up. Here is another maze-like section. Your goal here is to get through the bars in the northwestern section of the maze. To do so quickly from the start of the maze, take the right path and go up the stairs in front, then turn left and hit the switch to open the bars. Through the bars is a prison-like area with the blue door straight ahead. Hit the switch next to the compartment to open it, allowing you to get the yellow keycard. The switch also reveals several switches which opens the prison cells. Hit these if you want to kill some more monsters and get two stimpacks, otherwise backtrack to the main hallway. In the hallway, keep going eastward, making sure to go through the blue-lit passages lest you want barons of Hell to ambush you. When you see the big gray door up ahead, there is a small passage to your right. Go down this passage to the yellow door. Inside is a large computer room, with the switch that opens the big gray door. The hallway behind this door leads to the exit.

A Hell knight (Thing 259) has no flags set for any of the three difficulty classes, so it does not actually appear in the level.

* The vertex count without the effect of node building is 3976.