MAP07: Malpractice is the seventh map of Project Einherjar, and the final map of Episode 1: The Gaulheim Hit. It was designed by Mike MacDee (Impie) and uses the music track "". 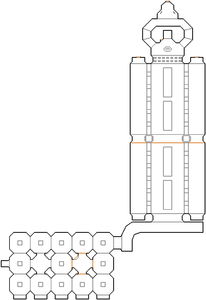 Map of Malpractice
Letters in italics refer to marked spots on the map. Sector, thing, and linedef numbers in boldface are secrets which count toward the end-of-level tally.

The final level of Episode 1 consists of three battles. The first is in the starting lab: reaching for the armor or switch lowers all the pillars, unleashing as many as all three Vargstein Sisters and several Stepchildren upon Juno. Use the super stims to help your survival against the Sisters' wrath. When all enemies are killed, hit the switch to access the main lab: a massive collection of stasis tubes.

Depending on the difficulty setting, you will face two or three Einherjars in this area. The lead Einherjars drop the red and yellow key respectively, which are required to open the gate at the other end of the chamber. Kill the collection of Juggernauts, resupply if able, and hit the switch to meet Dr. Gaul.

As soon as you hit the switch, backpedal to safety before Dr. Gaul can fire on you at point blank: she almost always launches a rocket first. Her firepower is somewhat deadlier than that of her cyborg children, and she dodges when injured. When the good doctor is killed, another wave of Juggernauts attacks you, pouring out of the exit chamber.