Mephisto's Maosoleum [sic] is a map that is part of the Master Levels for Doom II. It was designed by Sverre Andre Kvernmo (Cranium), and is contained in the file MEPHISTO.WAD. 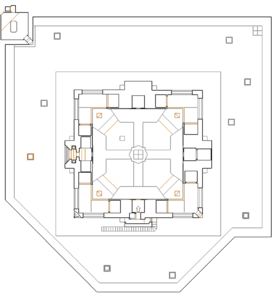 Map of Mephisto's Maosoleum
Letters in italics refer to marked spots on the map. Sector numbers in boldface are secrets which count toward the end-of-level tally.

Never waste the available rockets against the revenants on this level, as they will be needed when fighting the Icon of Sin. Instead, use the other weapons, whose ammo can be found in plenty throughout the level.