MAP07: Metal Mothers is the seventh level of the first episode of Back to Saturn X. It was designed by Björn Ostmann (Vader), and uses the music track "Conductor" by James Paddock. The par time is 2:00. In the official add-on version, this level's name is Arachnobeliever. 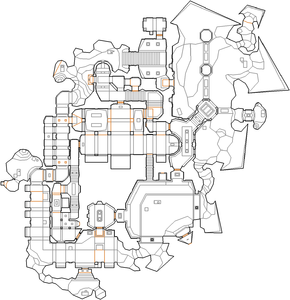 Map of Metal Mothers
Letters in italics refer to marked spots on the map. Sector, thing, and linedef numbers in boldface are secrets which count toward the end-of-level tally.

On I'm Too Young To Die (ITYTD) and Hey Not Too Rough (HNTR) skill levels, a super shotgun is placed in front of you as the map starts. Open the door on your right (south) and dispatch a demon waiting behind it, then ride the lift behind the door down to a ledge that you can follow west and north, collecting health and armor bonuses as you go, to find another super shotgun on all skill levels. Drop to the floor below and follow the corridor north past numerous zombies until you get to the north side of the map, where one or two arachnotrons are waiting, then approach the nearby lift to lower it and ride it up to a green-tiled hallway (there is a BFG9000 on your left on Hurt Me Plenty (HMP), or a chaingun on other skill levels). Follow the hallway east up two sets of steps, step through the bars that open ahead and press the green switch behind them; this will open a nearby wall leading to the blue keycard. Use caution on HMP or higher, as a spiderdemon will be waiting on the opposite ledge.

Drop to the floor below, which will release arachnotrons from a compartment in the south-west corner, then open the blue key door next to this compartment and turn left to climb some stairs blocked by another arachnotron. At the top, make a right and two lefts to find a switch and press it, then go back to the bottom of the staircase and kill any imps and revenants that teleport in; after doing so, look left to see that platforms have risen leading to a ledge on the opposite side with more revenants. Follow the ledge north to another pair of platforms and step across them to a lift, ride it up to a plasma gun then press the switch here to open the walls on either side and reach the ledge with the red key. There will also be a megaarmor here on ITYTD and HNTR, or a supercharge on HMP.

Drop to the floor, ready to kill a spiderdemon that is released from a compartment in the south wall, then go up the steps next to it to reach a large courtyard where two or three more spiderdemons have teleported in. Cross the courtyard to reach a red key door in the south-east corner, then open it to find a chaingunner (revenant on HMP or higher) guarding the exit button.

* The vertex count without the effect of node building is 3134.