MAP07: Not That Simple (Memento Mori)

MAP07: Not That Simple is the seventh map of Memento Mori. It was designed by Jens Nielsen, and uses the music track "Night Bats" by Mark Klem. 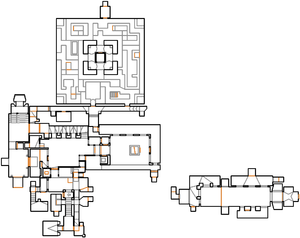 Map of Not That Simple
Letters in italics refer to marked spots on the map. Sector, thing, and linedef numbers in boldface are secrets which count toward the end-of-level tally.

Open the door in front of you, and head downstairs. At the foot of the stairway is an arrow on the floor pointing to a wall. Press on it to reveal a switch, and use it. Head back upstairs, and enter the doorway. You will be lifted up to the northern walkway. Head outside, and fall onto the platform where the super shotgun is. Step off, and open the northwest door. Press the western switch, and run past the lowered lift to the east. The wall in front of you will lower. Trigger the eastern switch, and grab the blue key. Return to the central section, and go upstairs. Open the next two doors, head south, and open the eastern, blue door. Head to the northeast, and a wall will open in the previous room to reveal a switch. Press it, and go back to the apex of the staircase to find that the silver bars have lowered. Take the lift down, open the eastern door, and rush through either one of the northern doorways to enter a maze.

Open the eastern door, flip the switch, and enter the southern alcove. Flip the switch here, and head through the new opening in the west. Enter the teleporter, grab the yellow key, open the southern, yellow door, and press the switch.