MAP07: Not That Simple II is the seventh map of Hell Revealed II. It was designed by Jonas Feragen and uses the music track "Zombi Rises from His Grave" by Petter Mårtensen (Thyrbse). In spite of its title, it has nothing in common with Memento Mori MAP07: Not That Simple, apart from using tag 666. It is, however, very similar to Dead Simple. 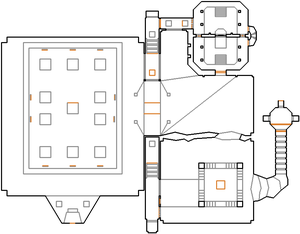 Map of Not That Simple II
Letters in italics refer to marked spots on the map. Sector, thing, and linedef numbers in boldface are secrets which count toward the end-of-level tally.

Grab the supplies on the lift you are on and flip the switch to rise up. Kill the arch-vile and the mancubi as you dodge the projectiles being thrown at you. You can flip the switches on the edges to lower several mancubi platforms, where you might find items and weapons you can use on the mancubi. When the last mancubus falls, the arena opens up surrounding you with arachnotrons. Again, kill all of them, and when you do, look south for a now-accessible switch. Flipping it raises a bridge so you can head eastward. At the next field, you will encounter a cyberdemon, and if you go south, you will find another field full of imps. The red skull key is in the middle, grabbing it causes revenants to teleport in. Go to the red door after picking up the key; the door is in the large field where the cyberdemon was, and kill the enemies inside. The BFG9000 is in this room, so pick it up. The bars here can be opened directly, so open them and get the yellow skull key in the next room. Return to the field with imps in it and press the gargoyle switch to open the bars. Kill the demons, but be wary of the chaingunners ambushing from behind. Grab the blue skull key at the top of the steps then go east from the imp field into a shaft. Kill the demons and open the blue door. Grabbing the super shotgun here pits you against three cacodemons, kill them and press the exit switch.

There is a second yellow skull key in the map, accessible from the first one. Lower the bars west of the first yellow key and follow the hall, opening the door and climbing the steps to find the second key. Grabbing this key triggers several monster ambushes, including a pain elemental who teleports right in, some chaingunners in a cage behind you, and revenants and cacodemons into the field. Unless you are going for 100% kills in this map, you might want to avoid this second key.

* The vertex count without the effect of node building is 782.