MAP07: Pasaulis is the seventh map of Mano Laikas. It was designed by Nicolas Monti and uses the music track " ". 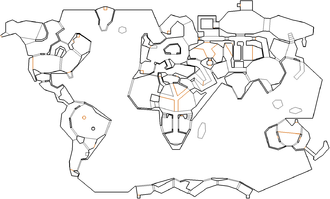 Map of Pasaulis
Letters in italics refer to marked spots on the map. Sector numbers in boldface are secrets which count toward the end-of-level tally.

The way this level is created resembles a world map. The red and yellow keys are in sections that resemble North America and Australia, respectively. The player starts at the southern tip of what resembles Africa, and the exit is somewhere that resembles southwest Asia.