MAP07: Prison is the seventh map of TNT: Evilution. It was designed by Andrew Dowswell. It uses the music track "Soldier of Chaos" (unofficial title) by Jonathan El-Bizri exclusive to this level. 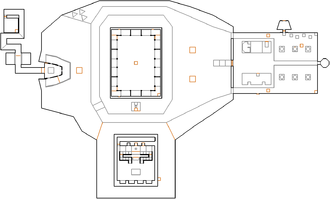 Map of Prison
Letters in italics refer to marked spots on the map. Sector, thing, and linedef numbers in boldface are secrets which count toward the end-of-level tally.

You should now be on the central platform, and need to reach the column on the southern part of the island containing an invulnerability at the top.

Speedrunners may want to dive into the damaging floor and enter the teleporter from the right-hand edge. This allows you to skip raising the bridge. It is also possible to jump to the island from the south using SR50.