MAP07: Research Lab is the seventh level of Doom 64, designed by Tim Heydelaar. The level is where creatures are being kept for study, but most have escaped. The level introduces nukage for the first time along with the radiation shield which appears as a bio-hazard sign instead of an actual radiation suit. It uses the music track "Relentless Coil". 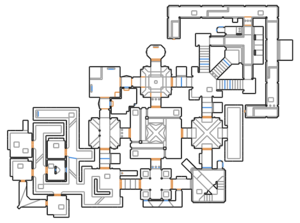 Map of Research Lab
Letters in italics refer to marked spots on the map. Sector and Thing numbers in boldface are secrets which count toward the end-of-level tally.

When starting the level, you'll find only one door accessible. Head through and beware that there are troopers hiding in the adjacent room, ready to ambush. When going through the right door, you'll be swarmed by lost souls that spawn in. Kill them and then push through, also taking down a spectre just by the door.

In the next room, you'll see caged imps and a Hell knight, along with a barrier that requires a blue key. Once again, dispatch them and continue, where you'll see several more troopers scattered throughout a maze of computer monitors. Head forward into the maze and in the rightmost room there will be a switch and another trooper by a camera. Press the switch and backtrack to the room with the Lost Souls, where you'll see a bridge has risen to allow access to the blue key.

After returning, find the blue barrier and blue door, and open them. The first room should take you to a plasma rifle and a newly spawned Hell knight. The other door takes you into a new area, with some imps and another Hell knight trapped in a cage. The elevator across the room lifts you to two red key switches, but you don't have to worry about those now. You'll notice a teleporter in the room. Take it and press the switch that you'll find behind you, and then return to the room just before the elevator. There more bars will have lowered to allow you to get the yellow key.

Take the next lift and you'll find a lone nightmare imp waiting for you. The next room leads to the sewer section, where you'll need to find two switches on the opposite sides of the tunnel to raise some bars on the second floor by the entrance to the sewer.

After raising the bars and coming to the above area, beware, as the room with close itself off and spawn two Hell knights ready to engage on higher skills. Take care of them and walk up the stairs to press the switch to gain access to the red key, which is by the room where you encountered the nightmare imp. After collecting the key, return to the room by the lift and open the containment unit, revealing yet another Hell knight. Once that's done, the exit should be accessible.

* The vertex count without the effect of node building is 1534.