MAP07: Sanctuary is the seventh map of Preacher. It was designed by Darch, who also composed the level's music track, "Memories from the Day I Died." 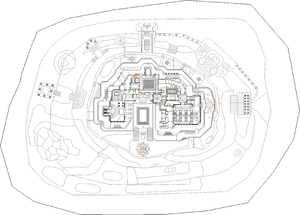 Map of Sanctuary
Letters in italics refer to marked spots on the map. Sector, thing, and linedef numbers in boldface are secrets which count toward the end-of-level tally.

At the start, turn around then go forward. Approach the wall at the end of the path to make it lower, then continue forward and wait for the second pillar to your left to lower, revealing a teleporter. Take it to enter the sanctuary. Your goal is to collect three keys. All the keys are inside the sanctuary: the red key is in the western side, the yellow key is to the east while the blue key is located in a room on the northern end. To collect the red key, simply flip the switch to its east to lower the platform it rests on.

For the yellow key, you'll need to press two switches. One is located on the carpet in the middle of the room, while the other is found on the southeastern corner of the room. After using both switches, a perpetually moving lift will be triggered surrounding the yellow key platform. Ride it up and collect the key. As for the blue key, in the south side of the room are three switches. Flip the one in the middle to lower the pedestal holding the key, then grab it. Doing so will raise bars locking you in a small area. Wait for the bars to lower to be able to escape. With all three keys in hand, make your way to the south of the level to reach a river. In the centre of the river lies a structure with a switch on its northern side. Press the switch to raise the structure, then enter the exit teleporter that is revealed.

* The vertex count without the effect of node building is 9003.