MAP07: Shrine of Quarthon (also called Shrine of Quorthon in the text file) is the seventh map of Crimson Canyon. It was designed by Jeffrey Graham and uses the music track " ". 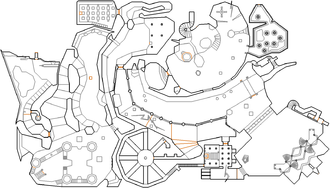 On the left of the bridge, lava is not always damaging. Climb the stairs, kill the lost souls, grab a medikit, the rocket launcher and a box of rockets.

* The vertex count without the effect of node building is 2705.