MAP07: Simply Familiar is the seventh map of Doom 2 Unleashed. It was designed by Philnemba and uses the music track "Shawn's got the Shotgun" by Robert Prince.

When using the music WAD included with this megawad, this level instead uses the music track "Maribum" by Paul Corfiatis. 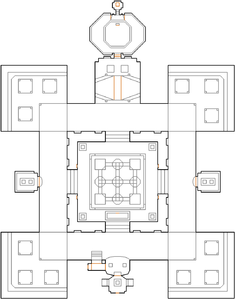 Map of Simply Familiar
Letters in italics refer to marked spots on the map. Sector, thing, and linedef numbers in boldface are secrets which count toward the end-of-level tally.

You start in an enclosed area with a super shotgun, a medikit and 11 backpacks. Take all the items then press the lion switch to lower the surrounding walls and reveal a square arena with several mancubi. On I'm Too Young To Die (ITYTD) and Hey Not Too Rough (HNTR) skill levels you will only see mancubi on the four square platforms in the middle of the arena, but on higher skill levels they will also appear on the outer edge of the arena.

Head to the north side of the outdoor area to find that a bridge has risen over the sludge, but do not try to cross it as Hell knights and cacodemons are teleporting in on the other side, joined by barons of Hell and pain elementals on Hurt Me Plenty (HMP) skill level and two arch-viles on Ultra-Violence (UV) and Nightmare (NM). Kill all the monsters then cross the bridge and open the tan door to enter an octagonal room. Head round the large silver column in this room to reach the exit door; when you approach it the column will lower to reveal a spiderdemon guarding a switch - use the switch as cover from the spiderdemon's attacks.

Once the spiderdemon is dead, flip the switch and immediately go to the exit door which will open to reveal an arch-vile - trapping it in the exit room will make it easier to fight. Once the arch-vile is dead, step on the blue pad behind it to finish the level.

The sludge pit at the north end of the level is inescapable if you fall into it before raising the bridge.

Flip the four switches on the walls of the central area with the mancubi to lower the four square platforms, which hold a berserk pack, a rocket launcher, a plasma gun and a megasphere.

There are two rooms on the east and west sides of the outdoor area that contain 12 energy cell packs and boxes of rockets respectively. The first time you try to enter each room you will be teleported back to the central area.