MAP07: Sledgehammer is the seventh map of 32 in 24, a deathmatch megawad. It was designed by Infurnus and uses a MIDI rendition of "Sledgehammer," by Peter Gabriel, from which the level takes its name.

This was the tenth submission to the project, arriving just under five hours into session, and just one minute after MAP06. According to the author, it took up to two hours to build, with an additional 30 minutes for testing and balancing the map. 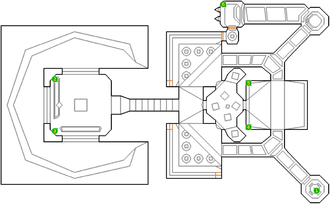 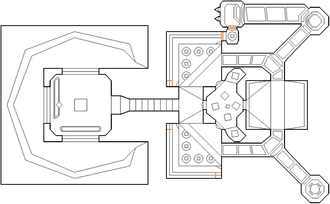 Sledgehammer is a small map, mostly quite well lit but not without some darker spots. Much of the action takes place in the eastern half of the map, as the western half consists of one room located at the top of a staircase. There is no cover here, but the rocket launcher is only available in this room.

The eastern half is more complex, albeit mostly symmetrical. Nukage features heavily, meaning players have to be careful of where they walk, as well as where other players are. It is made up narrow corridors (mostly 144 units wide) three more open rooms, which form a continuous circuit around the eastern half. In the centre of this circuit is a small outdoor section, which can be accessed from any of the rooms surrounding it. The floor here almost completely covered in nukage, with just the tops of some crates sticking out above the surface. The crates in the corner of this area contain a box of shells and a box of rockets.

The corridors also lead to the north-east and south-east corners of the map, which are the locations of the chaingun and super shotgun respectively. The corridor continues from the north-east corner, heading westward to a dark grey area. There are two doors here, which only move at the normal speed, presenting a significant obstacle to players. These doors lead to the trench running around the outside of the two central rooms. The trench is split in two by the staircase connecting the west and east halves of the map, so a teleporter is present at the end of each trench in order to move from the north half of the trench to the south. At the end of the south half of the trench is another teleporter and a plasma gun. The teleporter will take the player to the large teleport pad in the western room, putting them at risk from spawns #2 and #3.

Health and smaller ammo pickups are present in the map, but limited. Shotguns are also present, marking the location of each spawn point, with the exception of spawn #1 (see below).