MAP07: The Abbey is the seventh level of Eternal Doom and was designed by Paul Schmitz. 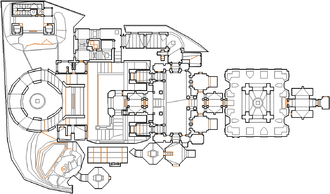 Map of The Abbey
Letters in italics refer to marked spots on the map. Sector numbers in boldface are secrets which count toward the end-of-level tally.

Behind that door, go up and enter the door with bright white stripes to the left and right. Hit the switch at the end of the room. Nearby the white stripes door, a teleporter room opened. Teleport to the other side, do not jump down for now, but collect the yellow key and hit the switch. Remember the teleporter room had two teleports? Now use the other one to a tiny watch tower. A corner of the watch tower can be opened. The corner of the other watch tower will raise you up. Hit the switch and quickly jump down to hit another switch temporarily revealed. A door will open, go up the stairs, watch out for the Arch-vile, grab the blue key. You can smash the window or take the more civilized way down. Open the gate, jump into the fence, you will be teleported to the other side.

Enter the room behind the door at (*). Leave the room through the yellow door to reach a courtyard (**). This place looks a bit lost, but it will not remain this way very long! At the opposite side, visit both of the rooms behind the two blue doors. In each room, go to the medikit at the window, a small skull will appear on the other side of the courtyard. Still standing right at the window, shoot the skull as long as it is visible. The skull is not a switch, but it has to be "killed" (actually, each skull is a fake texture covering an opening in the wall; it is Commander Keen behind it who takes shots), taking around 10 to 20 bullets, so you may have to repeat the procedure several times. When both skulls are dead, you will be attacked from behind and in each of the two rooms, a switch becomes available to open the door at the respective courtyard end.

Go to the courtyard's southern end. On the left side, an arachnotron is guarding a computer area map. Go up the stairs into the room with white tiles on the walls. To the right (attention: attack from behind!), a red square switch raises invisible stairs with candles. The red "smiley" switch on the other wall opens an opening at their top, jump through it. A switch behind you can open the wall at the other side, but you do not need it if you are fast. Through the small pool of water (there is a teleportation trick here), reach the opened wall, cross the waterfalls. Jump down carefully as you have to catch the red key here. Return to the courtyard (**), a spiderdemon will have fun with a cyberdemon.

Enter the room at the courtyard's northern end. There is an inaccessible megasphere on a pedestal. To the left, there are two computer terminals. One of them opens a barrier further down the hall (not necessary). Raise the red bars and use the computer terminal behind to switch off the blue energy field barrier. Behind that, the red skull switch opens the door between the two blue doors. There, enter a room with stained glass windows. The door will shut behind you, and you must reach the "ABANDON ALL HOPE" sign at the other side to have it open again. At this sign, push the wall, invisible stairs will raise you up, open the sign, jump in. A door at the other side and a switch remain to complete the map.

* The vertex count without the effect of node building is 3371.