MAP07: The Boardwalk is the sixth map of Community Chest. It was designed by Gene Bird, and was originally released standalone as part of his Blind Alley series. 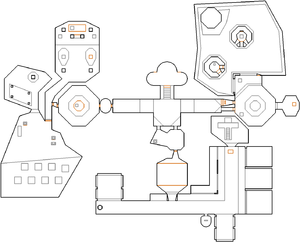 Map of The Boardwalk
Letters in italics refer to marked spots on the map. Sector numbers in boldface are secrets which count toward the end-of-level tally.

Go upstairs to the north, and flip both switches. Walk back down, and go through the next four doors to the west. Head to the northern room, and go under the arch to be teleported to the platform behind it. Grab the red key, jump down, and head to the now revealed southern door. Open it, and use the eastern computer. This will cause one of the bookshelves to the south to lower; grab the blue key, and backtrack to the start of the level. Open the blue door to the south, and walk in. Wait until the wall has lowered, and go east across the boardwalk. At the end, grab the box of shells and box of rockets (or at least walk into where they sit,) and the northern wall will lower. Grab the yellow key at the bottom of the stairway, and return to the beginning of the map. Go through the yellow door to the east, hit the switch nearby, and go through the eastern teleporter before the wall rises again. Press the next switch.

* The vertex count without the effect of node building is 772.