MAP07: The Bridge is the seventh map of Daedalus: Alien Defense. It was designed by Ty Halderman and uses the music track MM_02 by Rich Nagel. 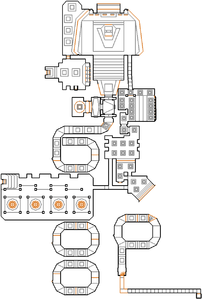 Map of The Bridge
Letters in italics refer to marked spots on the map. Sector, thing, and linedef numbers in boldface are secrets which count toward the end-of-level tally.

If you have found all four command codes, you will be greeted on entry by a severe shipquake and the lights temporarily going out. When they are back on, go through the northern door - the only one unlocked - and enter the main bridge.

Opposition on the bridge is heavy; be aware there is an arch-vile on the captain's chair, and that when killed, a stealth arch-vile spawns in its place. Jump over the counter on the western side, and go through the door on the south wall. This leads to the room containing the command console, which has two rows of symbols above it. If you have found all four command codes, the top row will be filled with symbols and the bottom row will be blank. Press the consoles in front of each symbol to cycle through the symbols on the bottom row, and make them match the symbols on the top row. When this is achieved, the nearby manual override control will open, revealing a switch. Trip this and it will open the escape hatch, showing you a camera's eye view of said hatch.

Return to the starting area and go through the malfunctioning now-open southern door. Avoid or kill the Hell knights beyond, and descend the staircase to the bottom level. A baron of Hell, the WAD's first, guards the hatch. Jump into the hatch, go to the end of the tunnel, and drop down the shaft to enter the next hub.

Most of this map is optional as far as making progress is concerned, however there is plenty here to reward an exploratory player. If you enter the doorway on the eastern side of the bridge, there is a substantial section behind it containing, among other things, the WAD's first rocket launcher, which is very useful should you wish to battle the arch-viles.

It is strongly suggested that any exploration is done before the four command codes are entered.

* The vertex count without the effect of node building is 2003.