MAP07: The Distant Base (Disrepair)

MAP07: The Distant Base is the seventh map of Disrepair. It was designed by Andrea Rovenski (Cyberdemon531) and uses the music track "Malebolge" by Mr. Freeze (from Doom the Way id Did). The par time defined in MAPINFO is 35 seconds. 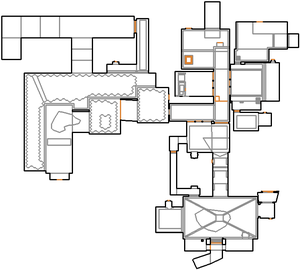 Map of The Distant Base
Letters in italics refer to marked spots on the map. Sector numbers in boldface are secrets which count toward the end-of-level tally.

One enemy fails to spawn in, thus you can only finish with 99% kills.

After using the arch-vile to jump to the red key, you can have it follow you through the red door, and jump up to the exit area.

* The vertex count without the effect of node building is 1322.

Once you kill the Hell knight in the second to last room, you can return to the waterfall at the south of the map, to reveal an Easter egg. Former associate of Cyberdemon531's and fan of her early Minecraft let's play videos, MRCoolmanist's face appears.