MAP07: The Great Wall is the seventh map of Hacx. It was designed by Adam Williamson. 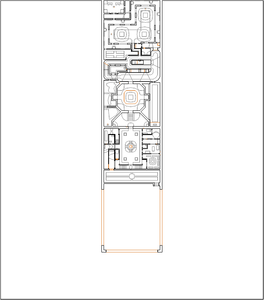 Map of The Great Wall
Letters in italics refer to marked spots on the map. Sector, thing, and linedef numbers in boldface are secrets which count toward the end-of-level tally.

Slay the thugs around you then approach the block in front of you to lower it and get a tazer, which will also open the north and south walls to reveal one or two androids. Head through the north doorway (which has stealths waiting behind it on "I am immortal" skill level or higher), then follow the water stream east and north to a lift that has a buzzer on it. Ride the lift up and turn left to get rid of some thugs, then walk through the doorway next to them to enter an L-shaped hall with thugs, phages and one or more monstructs, as well as androids in the overhead passage. Press a small button at the west end of the water to raise a second button at the north end, then press that button as well to open a wall next to the doorway you entered through. Go through this doorway (another wall will open to your right) and flip the switch on the wall to raise a lift in the hallway to the east.

Activate the lift you just raised and ride it up to the passage that had the androids, then walk round to the north-west side to enter a room with some computers. Press the button in the middle of the room and avoid the phages that lower around you, then go back to the passage and head to its south-west corner to find that a doorway has opened leading to a room with thugs and a monstruct. Flip the switch at the east end of the room to lower a lift behind you, then ride this lift down to an area with water streams and several androids - head east from the lift until you see the first switch on your right, flip it then follow the water west, south and east to find the second switch. From here, head west until you see two doorways on your left - the switches you flipped have opened bars blocking these doorways, allowing you to go through and confront three androids.

Flip the switch on the east side of this room to lower the south wall, step through it then head through a doorway to your right to dispose of some thugs and buzzers. Flip another switch in the north-east corner to raise a step up to the thugs' ledge, then go up the steps here to find a monstruct guarding a button (there is also an uzi next to the button on IAA or higher). Press the button then go back to the stream area, walk east to drop back into the corridor north of the starting point then continue east as if you were heading for the lift. A set of bars have opened in the south-east corner of this corridor, letting you push past some androids to get the password. Taking the password will open two compartments behind you containing a cenotrophexine and a hypo, along with a monstruct, an android and two phages on IAA or higher.

Go back to the starting area and head up the south staircase to a door, which you can open by pressing the panel (requiring the password) next to it. In the next room is a photon 'zooka on a plinth that is overlooked by androids - take the weapon and destroy the phages that are released around you, then head through the doorway that opens in the south wall and turn left (east) to go up a staircase leading to one of the androids' walkways. There are six doorways here, and you must go through five of them in turn to locate a switch - flipping one switch will reveal the next in the sequence.

Head back to the staircases and go up the west staircase this time, then follow the ledge north to the doorway you just opened. Walk through it, destroy any waiting androids then go to the south-west corner to find a switch between two vases; flipping this switch will open an ornate door in the middle of the ledge. Go through that door and round the corner to find one or two monstructs guarding another door, open it and slay another monstruct on your left before opening a third door on your right to enter a hall with some buzzers. Fight your way to the steps in the south-east corner and climb them to get outside, then step over any of the surrounding walls to end the level.

* The vertex count without the effect of node building is 1910.