MAP07: The Mancubian Candidate is the seventh map of Valiant. It was designed by Paul DeBruyne (skillsaw) and uses the music track "Aliens, Say Your Prayers!", composed by Robert Prince for Duke Nukem 3D. The par time is 4:00.

The Mancubian Candidate was featured in Doomworld's Top 100 Most Memorable Maps, placing 14th. 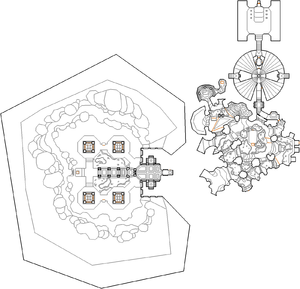 Map of The Mancubian Candidate
Letters in italics refer to marked spots on the map. Sector, thing, and linedef numbers in boldface are secrets which count toward the end-of-level tally.

This level revolves around a single mancubus that must be kept alive at all costs; if it dies too early then a pack of arch-viles will teleport in and almost certainly kill you.

Shoot the target switch on your right to lower the bars blocking your way, then step through and take the rocket launcher and super shotgun in the alcoves on either side of the room. Follow the black walkways round to the north and south sides of the starting area to find a shotgun and super chaingun in front of two skull switches that will open enclosures containing the aforementioned arch-viles, as well as lowering a yellow teleporter on the west side. Enter the teleporter to be transported to the platform with the mancubus then quickly step backwards to drop to the floor below. Kill the super imps and zombies in your vicinity, along with any enemies that teleport in, then drop off the east side of the ledge you are standing on to land in a water trench with the red keycard.

Taking the red key will allow more zombiemen and/or shotgun guys to teleport to the ledge above you. Follow the trench round to find steps leading back up to the ledge, then walk round to the north side of the mancubus's platform to find a button that will raise a bridge behind you. Kill one or two revenants that appear on the other side of the bridge, then cross it and proceed west past some chaingunners to a lift that you can activate to reach the upper level, where a super demon is waiting for you. The mancubus's platform will rise to the same height, so use the rock pillars as cover as you follow the path south and east past various enemies, including cacodemons that teleport in. When you get to the south-east corner you will see the yellow and blue keycards on top of poles - kill any revenants that emerge from the closets to the east, then press the button inside the east closet to lower the blue key.

With the blue key, head back to the south-west corner to find a switch and pull it; this will lower the pole holding the yellow key, but will also allow several arachnotrons to teleport in. Fight your way out of the ambush and pick up the yellow key, then head north to a locked exit door and pass through it to find a rocket launcher and a button that will kill the arch-viles you saw earlier, allowing you to kill the mancubus safely. Go round the next corner to find a plasma gun, megaarmor and other supplies then go forward to a switch that will lower a lift beneath you, sending you into a circular chamber. Pull the switch on the north wall to lower the surrounding walls and release some super spectres along with a cyberdemon, then go to the north side of the arena and head through the small door here to find two more switches. Flip the west switch then head north through another door that opens to find a red portal; stepping through it will send you into a death exit and end the level automatically.

* The vertex count without the effect of node building is 6336.