MAP07: To Hell and Back is the seventh map of Community Chest 2. It was designed by Ian Cunnings (The Flange Peddler).

It begins in a techbase, until the player enters a portal, upon which they are whisked away to a structure in Hell filled with a yellow haze. The final key must be found in this location before you can return and exit the map. 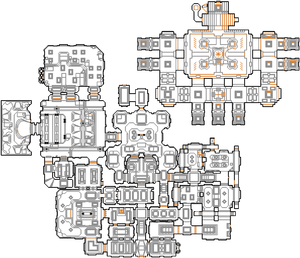 Map of To Hell and Back
Letters in italics refer to marked spots on the map. Sector, thing, and linedef numbers in boldface are secrets which count toward the end-of-level tally.

Hit the switch you find at the entrance here and enter the cargo bay. Find the door to the south, and hit the switch which opens the doors to the north. This in turn allows access to the ledge where the imps were. What you want to do is head all the way to the eastern portion of the map. Take the eastern door from the ledge to a big room with a locked portal. Go to the southeastern corner of this room and take the eastern door (the one on your left when facing it). Cross the elevator and hit the switch to open the nearby door. There are conveyor belts transporting various items including a super shotgun, and in the room to the north, you will find two switches. One switch is locked, remember it for later. The other one configures the nearby elevator you crossed earlier to go downwards. Go all the way south, then west a bit and then go north to where the elevator is. Pick up the yellow keycard on top of the crate there, and then go back to the aforementioned yellow switch. This lowers the blue keycard which will be transported via conveyor belt. When you find the chance, nab it.

Afterwards, head to the southern portion of the map. You will find the red switch here. Slightly to the west and north of that is the blue switch. This switch opens a door to the red key. After hitting it, go south, east past the red switch, north, east, north, west, and straight to the red key room. Press the switch to lower the key. You will be trapped for a little while once you get it. When the bars rise, head back to the red key switch and press it to configure the elevator directly behind you. Go straight across and hit the switch in this room to activate the portal. Now hit either switch on either side to exit this room and enter the portal.

You will end up in a hellish, marble-like environment. When the platform lowers, press the switch in the open area, this causes the red skull key to spawn in. Prepare to fight some mancubi and other monsters in order to open the passage to the teleporter. Kill the arachnotrons to raise the bridge to that teleporter. A lone arch-vile will teleport in to guard the exit from this area. Once back in the base, enter through the red skull key door to exit, being wary of the baron of Hell that teleports in the room.

* The vertex count without the effect of node building is 8961.

The special effect for the transition between the techbase and Hell would later resurface as the introduction to Community Chest 3 MAP24: Amalgamation, albeit without the yellow haze.