MAP07: Total Enclosure is the seventh map of Sunlust. It was designed by Zachary Stephens (Ribbiks) and Daniel Jakobsson (dannebubinga), and uses the music track "Moon" from the game The Legend of Dragoon. 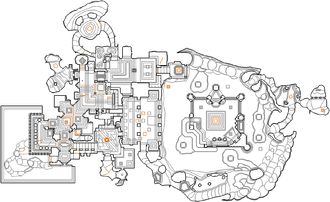 Map of Total Enclosure
Letters in italics refer to marked spots on the map. Sector numbers in boldface are secrets which count toward the end-of-level tally.

Like Dead Simple this level features mancubi and arachnotrons as bosses. However, your essential objective on the level is just killing all the arachnotrons.

At the start, in front of you is a super shotgun which, when you approach it, will respawn elsewhere as if running away from you. If you try to get it again it will respawn again. Conclusively this will appear in the room southwest of the L-shaped corridor but before heading there, slay a recent arachnotron that has spawned in the room you started the level.

Because of the non-linear nature of the level it is not important in what order you kill arachnotrons. If it is your pistol start go to the east side of the L-shaped corridor. You should notice a chaingun. Take it but do not yet enter the nukage hall with columns to the east (assuming that you do not possess rocket launcher). Instead, turn left and climb the stairs filled with ammo clips. As you leave the last step of the staircase, mind a chaingunner behind you. Kill him and grab the backpack (very useful) in his ambush room. Keep going further and mind another ambush consisting of three imps and another arachnotron. Kill them and if you want find secret #3 and secret #4 here around.

Now go to the aforementioned room in the south west to get green armor and the super shotgun (that escaped from you). Approaching this opens two ambushes on both sides of the room, so better retreat to the L-shaped corridor from where you can find the enemies, as well as the arachnotrons. When done with them proceed to the corridor southwest. If you walk around the corner to the right or left you can discover another ambush with an arachnotron. Deal with all enemies and travel to the east side to the room with a large green cone. Before doing anything here, turn around and ascend the stairs leading to the west. If you have not killed the arachnotron appeared earlier, do this now and mind two enemy traps behind (these can be either imps or revenants).

Now return to the room with green cone. Flip the green button to release the rocket launcher from the cone. Save your game and grab the weapon. Packs of enemies will spawn to this room (imps on HNTR or lower and revenants on HMP and higher). Deal with them all and take one or two arachnotrons.

Now visit the eastern nukage hall with columns (this room also provides access to this). Jump over all pillars until you will be on the large platform with two medikits and some ammo. Two arachnotrons will spawn in the north and south of the hall. Now, since you have the rocket launcher, it is easier for you to kill them with only this weapon but try to not delay here. Now get back to the L-shaped corridor via jumping over the pillars. Ascend to the higher ledge and when you see double exit sign enter the large hall to the east. Take supercharge and green armor at the end. Numerous traps will open. Repulse all their attacks and remember about slaying arachnotrons. In conclusion the exit will be unlocked. Enter the exit teleporter to finish.

To get the BFG, take the stairs on the inside west wall up, outside, and around, and then back in. (You won't be able to get back up here, so if you want the shotgun shells, take them now.) A skull switch embedded in a column will teleport you to the pedestal.

As soon as you move on the pedestal, several things happen. Some of the low walls around the pedestal will lower. The doors to the structure close again. A block will raise on those stairs, preventing you from getting outside that way. A pillar with a teleporter pad, outside this structure, will lower. And a flood of monsters will begin to teleport in, both at ground level, and in balconies at the north.

After about 15 seconds, the steps to that south-west switch will lower. Press the switch to open the doors again. The aforementioned teleporter will bring you to a spot right outside the exit.

* The vertex count without the effect of node building is 10719.