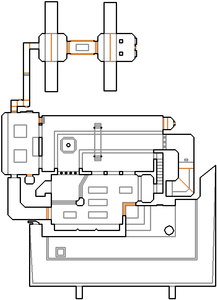 Map of UAC Nukage Areas, Nukage Monitor/Flow Control Facility
Letters in italics refer to marked spots on the map. Sector, thing, and linedef numbers in boldface are secrets which count toward the end-of-level tally.

At the start, go forward and enter the door to your left. Continue forward, then turn right into the opening and go down the stairs to the left. Cross the bridge in front to the other side, then go left and once you're near the stairs turn left again to collect the blue key. Return to the room after the start and open the blue door in front, slightly to the left from the top of the stairs. Follow the hallway and go through the door straight ahead. Flip the switch nearby to lower the lift next to it and ride it to the top. Turn left, go down the corridor and open the door beyond a flow of nukage after collecting a radiation shielding suit in the room. Open the door in front, grab the yellow key and press the switch to open the flood gates. Backtrack until you find a yellow door, then open it and open the door to the left in the next room. Drop down, move past the bridge and into the now accessible opening. Turn right, drop down and move forward to exit the level.