MAP07 is the seventh map of Dystopia 3. It was designed by Anthony "Adelusion" Czerwonka and Iikka "Fingers" Keränen and uses the music track "". 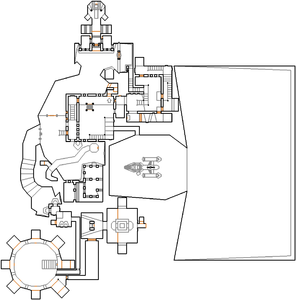 Map of MAP07
Letters in italics refer to marked spots on the map. Sector, thing, and linedef numbers in boldface are secrets which count toward the end-of-level tally.

MAP07 is where Dystopia 3 begins to show more teeth. With tight passages, setpieces that spell virtually certain death for the unprepared and an ending sequence reminiscent of a Cyberdreams level, the difficulty of this map is significantly higher than any of the preceding maps.

Doomguy has landed his spaceship properly this time. Unfortunately, you begin surrounded by zombiemen, shotgun guys, imps, demons and one chaingunner (not on Hey, not too rough and below). Grab the armor and shotgun, then proceed to clear out the enemies. You can get a super shotgun and a chaingun by checking the areas between the engines and the body of the spaceship. Once loaded up, equip the super shotgun and head into the tunnel in the north.

As you turn the corner, you will encounter a revenant (imp on Hey, not too rough and below). You will emerge into a silver building. Behind the windows in the distance are up to four chaingunners. To the right of the doorway into the building is a mancubus (cacodemon on Hey, not too rough and below). See if you can cause some monster infighting, which will save you much pain. Head into the silver building and mind the imps on the raised area to the east. As you descend the staircase, watch for a chaingunner in the corner, then a mancubus in the northeast of the room (both not present on Hey, not too rough and below). Lower the elevator ahead. On Hurt me plenty, watch for the demon on it; on Ultra-Violence and above, a spectre is on it instead. terminate it with your super shotgun, and ride it up to the raised area where the imps were.

Clear the imps out and get into the ornate brown building. Kill the mancubus past the second archway, then head around into the darker part of the building. In this narrow passage, you have to fend off a Hell knight (demon on Hey, not too rough and below). Using monster infighting, you can let an arachnotron do the work for you. Kill the arachnotron (two on Ultra-Violence and above), then collect the blue key, a plasma gun and a much-needed soulsphere.

Head back out into the outdoor area and go to the gate in the north. On either side of each gate is a switch. The first time you use these switches, you need to press them twice to lower the gate (once to remove a miniature blue door that looks like the switch, the next to actually use the switch). Head north and watch for an arachnotron and a revenant (two of each on Ultra-Violence and above), as well as cacodemons behind the windows in the building ahead. This next building is full of traps, with a particularly devious one right at the front door. Follow these steps carefully to grab the key and escape unscathed:

Go through the thin grey door and kill any chaingunners ahead. Head up the stairs and deal with the mancubus (imp on Hey, not too rough and below) at the corner. This next darker corridor has up to eight imps and a mancubus. Feel free to dump your plasma cells here. First, head onto the right (raised) half of the corridor, open the door and grab the red key. Next, head down the steps and open the red door. This leads to the tiny corner platform you saw earlier. Open the other door, pull out your plasma gun or chaingun and mow down the shotgun guys in here. Head east, open the big brown door and kill up to four cacodemons behind it. Grab the soulsphere and flip the switch.

This switch opens up access to the final stretch of the level, but also opens up a couple of traps. You now have to backtrack quite a bit to the bottom of the first set of steps in this building. In order, you will encounter the following traps:

Head into this last trap and flip the switch. This raises you to a platform with an arachnotron and reveals a shortcut back to the first building of the level.

Head out of the first building again. The bars directly in front of the doorway (marked "exit") have lowered. Head through it to find a passage with a number of tough monsters. At the end is a stucco building with a baron of Hell (Hell knight on Hey, not too rough and lower). Head into the building and notice a hole in the corner. Pull out your plasma gun, drop in and hold down the fire button - you are dropped into a small room with up to five cacodemons. Kill them and head into the tunnel ahead, with a revenant leading up to six spectres.

This last stretch of the level is a bit where you'll have to take out a cyberdemon not with weapons, but with tactics. In this next arena, you face a cyberdemon (baron of Hell on Hey, not too rough and below) who will teleport around the eight alcoves in the raised part of the arena. Your task is to flip the eight switches in the arena, one of which raises a staircase while the other seven lower brown walls at the edge of the arena. You then need to head up the staircase, run around the edge of the raised part, and escape through the passageway in the southeast - all while dodging rocket fire. While speed will help you flip all eight switches, you may need to be a bit more cautious when doing the run around the raised part - the cyberdemon can teleport into alcoves ahead of you and kill you when you cross its line of sight.

Once you have gotten to the doorway, collect a soulsphere and kill up to three arachnotrons in the hall ahead. Head through the wooden door into a red room with up to three revenants. The cyberdemon you dodged just now has teleported onto a pedestal in the outdoor area east of this room. Head to the east side of the central structure (be wary of rockets!) and flip the switch to crush the cyberdemon.

In the final outdoor area, a mancubus lies in wait (two on Ultra-Violence and above). As you head towards the alcove in the east with the exit signs, a trap will activate in the north and south; each contains a cacodemon (Hey, not too rough and below), a Hell knight (Hurt me plenty), or a mancubus (Ultra-Violence and above). Flip the switch in the alcove to exit the level.

* The vertex count without the effect of node building is 1651.

In the west of the level, there is a pair of switches that are used to lower a fence, allowing access to and from the north part of the level. These switches appear to require the blue key to be usable, but lift actions cannot be used with locks in vanilla Doom. The solution is that the first switches seen are not the real switch - they are thin overlays with the same switch texture, which serve as a tiny blue key-locked door concealing the real switch. When the player uses each "switch" with the blue key, the overlay sector opens up, revealing the real switch to lower the fence. The only disadvantage with this simulation is that the player must press the "switch" twice to proceed.